House Minority Leader Kevin McCarthy givers us his weekly view from Capitol Hill. In his words ... 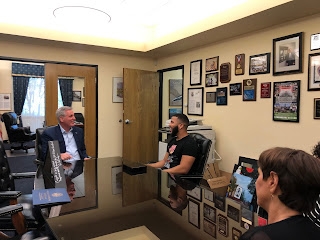 "It is a privilege to acknowledge the impressive achievements of our local students and teachers. These students are moving on to even greater successes and are positioned to make a positive impact in their communities. I am confident that they have learned the importance of putting forth the extra effort from the very teachers they nominated – teachers who exemplify what it means to be a positive role model. Congratulations to both the students and teachers on these well-deserved awards.

I also presented Blaine Hodge, a local hero from our community, with the 2019 Citizen Honors Award from the Congressional Medal of Honor Society. Last September, Blaine was having a meeting at a local Starbucks when a woman ran into the store, yelling for help. That’s when her boyfriend came in, chasing her with an 18-inch-long machete and threatening to kill her.

Blaine sprung to action. He threw the violent aggressor — who was mid-attack — off of the woman. The man then turned to Blaine, stabbing and hitting him in the forearm, thigh, and chest. Thankfully, both Blaine and the woman survived their wounds, and Blaine has made a near-full recovery in just seven months.

Despite the injuries he sustained, Blaine has kept a positive attitude through it all, saying he was meant to be there. I am honored to know Blaine and hope that we can all be as brave as him should we ever find ourselves in a similar circumstance.

Posted by Richard Beene at 4:10 PM