California is running a huge budget surplus but don't expect to see any of that money back, Bakersfield Observed lists some candidate endorsements and a big shoutout to KGET for airing political debates

Welcome to Bakersfield Observed. Our mission is to celebrate life in Kern County by focusing on newsmakers and events and the local characters who make this community such a special place. The views expressed here are strictly my own and do not represent any other company or publication.
* ... CALIFORNIA SURPLUS:  California's state government is enjoying a record year with revenues so strong they are expecting the surplus to balloon to $97.5 billion. Sounds good, right? But if California is bringing is so much more than it budgeted, don't you think Gov. Gavin Newsom would be thinking about giving some of it back? There are plenty of options: the state could reduce vehicle license fees, permanently lower the tax on gasoline or

temporarily cut taxes, and yet none of this is being considered. Why? Well if you live in Democratic controlled California, you know lawmakers never run out of things to spend money on. The new budget estimates $300.6 billion in total spending during the fiscal year that begins in July — a $14 billion increase from what Newsom proposed to lawmakers only four months ago. The governor’s plan asks lawmakers to devote billions of dollars to a raft of new items: an inflation relief package for Californians, more money to address dangerous drought and wildfire conditions, subsidies for low and middle-income healthcare plans and the highest per-pupil school funding levels in the state’s history. So here we are, amid a record money making year for California, and taxpayers won't see any of it back. Welcome to the Golden state.
* ... KUDOS KGET: Thank goodness for KGET TV, the lone mainstream media outlet that has the time, money and resources to air debates this election year. The Californian has sponsored debates before, but print publishers are facing falling circulation numbers and tough times. So it has been left to KGET who recently focused attention on the Third District race to succeed retiring Supervisor Mike Maggard. With no incumbent in the race it was an interesting evening featuring former homeless shelter director Louis Gill (who looked stiff initially but was well prepared), retired CHP officer Brian Smith (a seemingly good natured man who appeared befuddled at times trying to answer questions) and Jeff Flores, the longtime Maggard aide who was the smoothest, most articulate and well informed of the bunch. Look to KGET to re-air some of the candidate debates.
* ... BAKERSFILD OBSERVED ELECTION PICKS: Here are a few of my picks for the election this year - not a complete list of endorsements to be sure - but choices based on my own research and how effective these candidates might be:
- District Attorney Cynthia Zimmer has proven she is the right person for the job at a time when we need a District Attorney who is not afraid to throw the book at the bad guys. Zimmer is no nonsense, she is unapologetically tough on crime and she will not sell her soul or position for political expediency. This one is easy because he is running unopposed. Vote Zimmer for DA. * ... SHERIFF DONNY YOUNGBLOOD: The sheriff is also running unopposed but it doesn't mean we don't enthusiastically endorse him. Like Zimmer, Youngblood is the right person in the right job for an era when we need crime fighters, not wishy washy politicians. This may be Youngblood's last term in office, so let's send him to another term. Vote Youngblood. 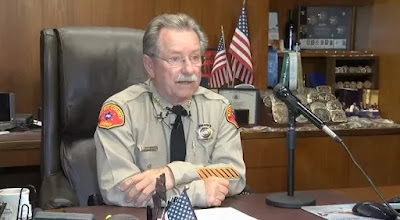 - Assemblyman Vince Fong deserves to be returned to the 32nd Assembly District for another term. Fong its intelligent without being an ideologue, a proven rising star in the California GOP and an assemblyman who has proven he can do more than simply vote "no." Vote Fong for state Assembly. 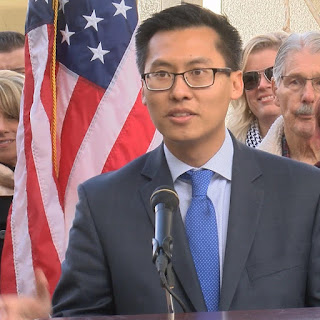 - Leticia Perez deserves your vote to go to Sacramento to represent the newly drawn 35th Assembly District, the old Rudy Salas seat. As a Kern County Supervisor, Perez has not served without controversy but her deep knowledge and connections in Sacramento, coupled with a realistic, Valley-based agenda that balances the conservatism of her district with more liberal Sacramento, makes her our choice. Perez sees the future of a much more diverse state and has worked tirelessly to bring disparate groups together. Vote Perez for the 35th Assembly District. 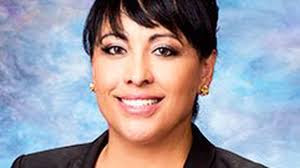 - Jeff Flores stands above a field of three candidates and deserves your vote to succeed Mike Maggard on the Board of Supervisors. Flores has proven himself to be a reasonable conservative who has pledged to make fighting crime and cleaning up homeless encampments his top priority. In the KGET-sponsored TV debate, Flores pledged a "zero tolerance" policy on homeless encampments, a refreshing and bold statement from someone who clearly has his ear to the ground. Flores has worked for years as Maggard's chief of staff and he also serves on the Kern High School District board of trustees. Of his opponents, former homeless shelter manager Louis Gill wanted to run against Rep. Kevin McCarthy but changed his mind at the last minute, and retired CHP officer Brian Smith also had his heart set on running for sheriff. Elect Jeff Flores and free up Gill to run for Congress another year while Smith can wait for Sheriff Donny Youngblood to retire. 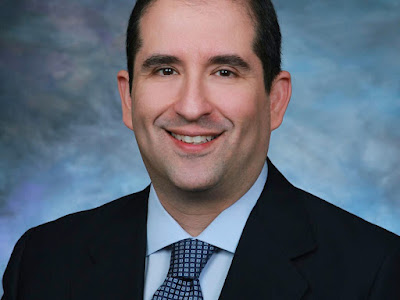 - Congressman David Valadao is a Republican who represents the 22nd Congressional District which leans Democratic. He has served the district making courageous stands, including being one of a handful of Republicans in Congress to vote to impeach former President Trump. Valadao has worked hard for the district and he deserves your vote. Those running against him include Republican Chris Mathys, Republican Adam Medeiros and Democrat Rudy Salas. 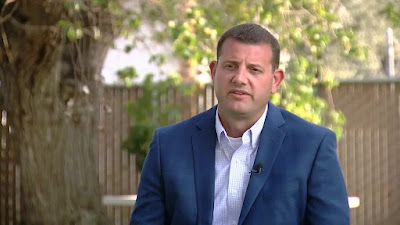 * ... MELISSA HURTADO: The 16th state Senate district is a newly drawn one, so this race is wide open in a sense. Our endorsement goes to Melissa Hurtado, who represented the 14th District before redistricting. Hurtado is a Democrat but carries a lot of the more conservative positions that Valley Democrats often hold, and she has proved herself worthy for another term. Also running are Democrats Nichole Parra and Delano Mayor Bryan Osorio and Republicans David Shepard of Porterville and Gregory Tatum of Bakersfield. Vote Hurtado. 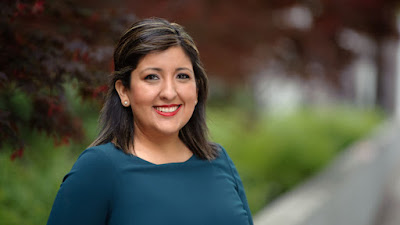 * ... GENERATIONAL PASSINGS: A whole generation of Bakersfield leaders is passing before our eyes, men and women who helped build this community and who no doubt will be remembered for their contributions. Among them was Dallas Grider, who enjoyed a wild and successful run as a football coach at West High and Bakersfield College. Grider was 77 and was inducted into the Bob Elias Hall of Fame in 2008. Also dying was longtime CSUB professor Dr. Louis Wildman who was inducted into the CSUB Hall of Fame in 2021 and was known as truly one of the nice people to work on the campus. (He was known as a regular at pickup basketball games at the old gym on campus) And, can you believe it has been two years since we lost Bob Hampton, the larger-than-life Taft businessman who epitomized the swagger and hard work that defines Kern County? Hampton was a graduate of Taft College where he played basketball, and he went on to his beloved USC where he played basketball from 1957-1960. He was 82 when he died. (file photos of Grider, Wildman and Hampton) 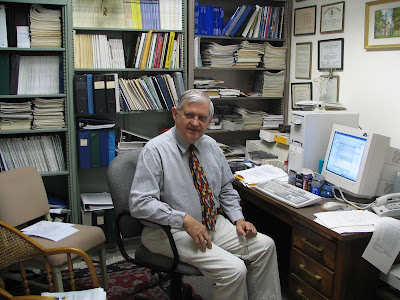 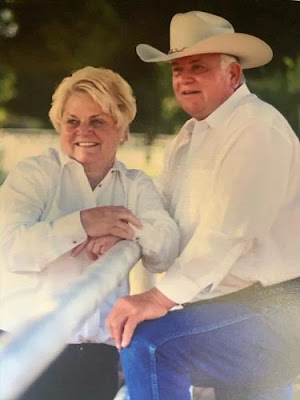 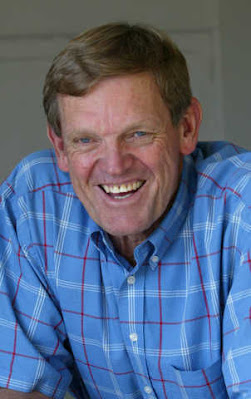 * ... OLD MEMORIES: This old photo of Granite Station near Woody was taken back in 1903. Courtesy of the Kern County History Fans Facebook page. 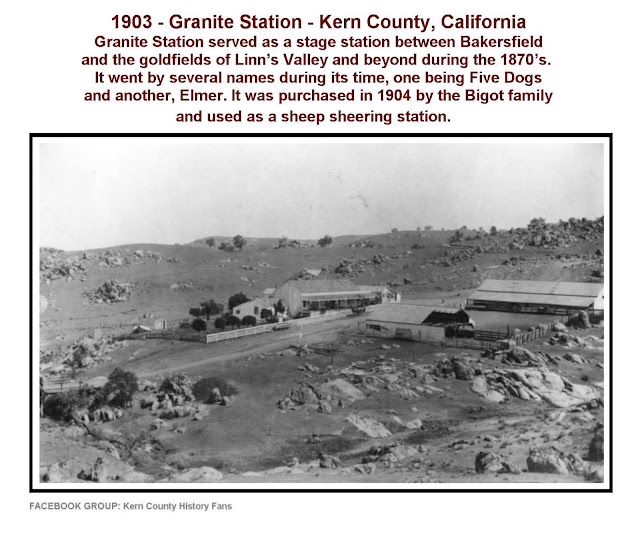 * ... MORE MEMORIES: And finally feast on this old shot from the 1940s of a gas station around town. Thanks to the Kern County History Fans for this photo. 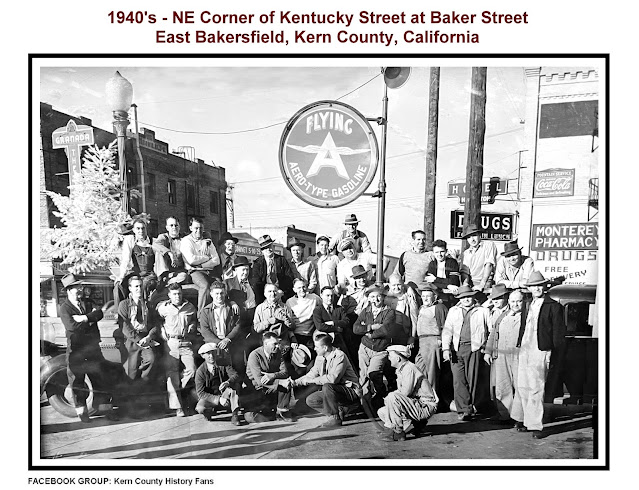