Of cancer, love and a boy named Danny Klancher 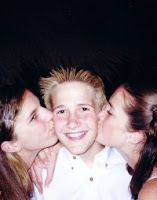 Danny Klancher was just 15 when he died of leukemia almost exactly seven years ago, but his memory remains alive thanks to a determined mother and the power of social networking. I know Barbara Reid as a local artist (see her website here) and fellow former member of the of the Bakersfield Museum of Art Foundation Board of Trustees, but what I didn't know until recently what that she lost her son Danny (his website here) to cancer in 2002 when he was a student at Stockdale High School. And now she's using the power of Facebook to build a community not only to remember Danny, but also to rally around the cause of beating childhood cancer. It's a testament to Facebook that communities can form virtually overnight, and in this case it's for a good cause. If you think Facebook is something just for kids, think again. Barbara has been getting commitments to donate at the Cure Children's Cancer website supporting St. Jude Children's Research Hospital. About the same time I was checking out Barbara's website, 7-time Tour de France winner Lance Armstrong posted on Twitter a new cancer fighting commercial funded by his Livestrong Foundation. Check it out here. In Barbara's words:

"I used internet support groups as far back as I could to share information when Danny was first diagnosed (1997) and particularly after he relapsed (1999). At that time, the internet was not as sophisticated as it now. I was delving into medical research as best I could, but it was raw, and some of it from other countries. No filters--I had to take the precious time to read it all myself. Now there is CureSearch ( http://www.curesearch.org/ ) which compiles protocols for families and is a wonderful roadmap during a difficult time."
Posted by Richard Beene at 12:51 PM

I am praying for Barbara and her family. My sister lost her son to cancer two years ago and I know the loss.