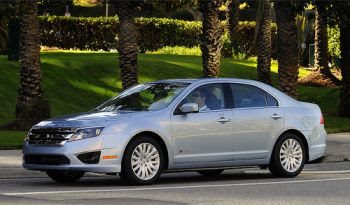 Sounds impossible, doesn't it? Hybrid or not, how can any car get 1,000 miles on one tank of gas? Apparently the folks over at Ford Motor Co. have figured it out, and they are out to prove it with the 2010 Ford Fusion hybrid now selling locally over at Jim Burke Ford. I've sung the praises of the Fusion before (read previous post here) and now comes a story saying a team at Ford plans on driving the Fusion one thousand miles on a single tank (read full story here), all to raise money for the Juvenile Diabetes Foundation. To reach their goal, they have to average at least 57 miles per gallon. I talked with Chad Manning, general sales manager over at Burke Ford, and he had this to say:

"We have received four and sold them all within 24 hours of hitting the showroom! Yes, the customers love them and the feedback is wonderful. They really enjoy playing the 'fuel economy game.' The LCD instrument cluster has a real time fuel economy gauge so that the driver can monitor their economy based on their driving habits. The better driver you are (greater fuel economy) the more green leaves you are awarded for your tree on the display, signifying eco-friendly driving. It is really a kick. We have two more 2010 Ford Fusion Hybrids due to arrive the early part on May."

It's the ultimate irony that just at a time when folks are having trouble getting credit, and when domestic automakers are struggling, Ford comes out with a product just perfect for our times.
Posted by Richard Beene at 1:16 PM

I want to love this car but the styling seems kind of dull. I like it that Ford has its shit together and is making good cars.

Anon:
Thanks for reading and thanks for your input, but please watch your language.

you're telling people to watch their language?