Today's Bako Bits: from an obesity summit to Michael Rubio to Lois Henry and Alan Tandy

Coming off another fabulous weekend in B-town, beautiful weather, everyone outdoors, on the bike paths, out and about. But life and politics and fund raising goes on. Here are some tidbits about town:

* A PITBULL NAMED LOIS: You'd think City Manager Alan Tandy would know better by now than to take on Lois Henry. Alan is notoriously prickly and seethes when Californian columnist Lois points her snarky prose his way. But what is going on now is rich beyond words. Word to Alan: don't challenge Lois to do any digging because that's like giving scent to a Tennessee bloodhound. There is nothing she won't find. Check out their latest dueling on her blog found here. Enjoy.
* OBESITY SUMMIT: Not to pick on Bakersfield, but could there be a better place for an "Obesity Summit" than our fair city? Well we're having one, set for April 30, and no it won't be held at Costco or Hometown Buffet. It's sponsored by a host of well meaning public health organizations and will feature Gwen Foster, the "health czar" who challenged the city of Philadelphia to get serious about obesity. It's set for the Marriott Convention Center. Call Public Health at 661-868-0306 for more information.
* AREA PARK: Was great to see the crowds over at the new Aera Park baseball fields in the southwest this weekend. Thanks to a generous donation from Aera Energy and the efforts of folks over at Southwest Baseball, we have a dozen new fields on 40 acres that are absolutely beautiful. Hats off to folks like Duane Keathley (incoming downtown Rotary president and all around good guy) and local attorney Rob Noriega for making this happen.
* RUBIO FOR SENATE: Fifth district Supervisor Michael Rubio is one of the local Democrats' rising stars. He's got all the tools: he's young, extremely bright, extremely ambitious, has the nice looking family and most important, he has the money. Shown here with wife Dora and adorable daughter Iliana, Rubio is running for the 16th State Senate district seat being vacated by Sen. Dean Florez, the Shafter Democrat who is being termed out. Word has it that Rubio has raised almost $400,000 to scare off any competitors and it appears to be working. The only serious competitor for the 2010 race is former Assemblywoman Sara Reyes. Rubio, who also happens to be an accomplished runner and cyclist, is now up on Facebook (check out his website here) and is Twittering like a madman. 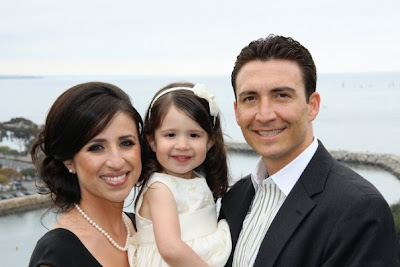 I'm having trouble understanding how B'field can be a meth hotbed and yet still have an obesity problem.