Coming off the disabled list: Wendy Wayne, John Moorhouse on the mend 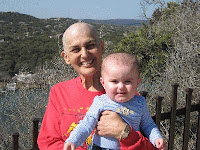 Catching up with a couple folks who have been battling the demons of illness: Wendy Wayne and John Moorhouse. Traded emails with Wendy and got a rundown of her battle against non-Hodgkins lymphoma (see previous post here). She just returned from four days in Austin visiting son Larkin, his wife Katie and adorable granddaughter Maya (pictured with Wendy). She's done with the stem cell harvesting and will head back to the City of Hope Hospital next week for a battery of tests. Then later this month she'll check in as an inpatient for the stem cell transplant. As usual, Wendy doesn't dwell on her own illness but spends time asking others about their lives. 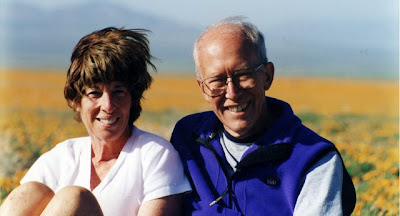 Meanwhile John Moorhouse, husband of Californian publisher Ginger Moorhouse and a longtime local insurance agent (pictured here), is doing better after a kidney transplant down at UCLA Medical Center. The transplant went without a hitch but in the recovery John developed valley fever and now he's being treated for that. Good news: John was released last week, readmitted with a minor development and should be back soon. Thoughts and prayers go to both Wendy and John.
Posted by Richard Beene at 10:36 AM