The slick new annual report from Bakersfield College showed up on my desk this week and it makes for a fascinating read. It's easy for BC to get lost in the shuffle as Cal State Bakersfield continues to grow on the other side of town. But BC has been around since 1913 and you tend to forget just what an impact this school makes on our community. Hats off to BC marketing guru Amber Chiang for pulling together a compelling read. Check out some of these statistics:
* ... ENROLLMENT: Total enrollment topped 17,000 full-time and part-time students in each of the fall and spring semester, and about 10,000 in the summer.
* ... FULL-TIMERS: About 22 percent of the registered students were full-time students, meaning they were taking at least 12 units.
* ... FINANCIAL AID: Nearly 90 percent of the students received some kind of financial assistance.
* ... TOTAL HEADCOUNT: For the whole year, the school served 33,235 students. OF those, 55.7 percent were female and 44 percent were male. Here's something puzzling: the gender of 105 students was listed as "unknown." Hmmmm.
* ... MAJORS: The top declared majors were registered nursing, business administration, criminal justice, liberal studies, psychology and undeclared.
* ... TRANSFERS: The top transfer schools after getting their AA degree were UCLA, UC Davis, UC Berkeley, CSUB, Cal State Northridge and Fresno State. 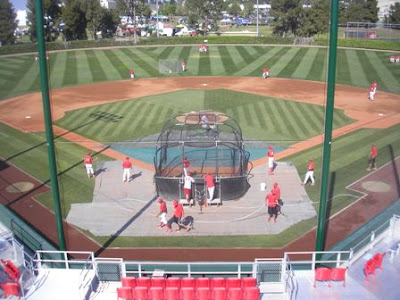 * ...ETHNIC MAKEUP: Latinos make up 42.9 percent of the student enrollment, followed by Caucasian at 35.7 percent, African-American at 6.8 percent and Asian at 6.4 percent.
* ...STUDENT AGE: About 59 percent of the kids are between 19 and 24 with the rest older, clearly reflecting the commuter and reentry aspects to this community college.
* ... HISTORY: BC was founded in 1913 and had a first year enrollment of just 113 students. The school set up shop on its current 153-acre campus in 1956.
* ... ATHLETICS: BC has a rich history in athletics. It has 17 teams in nine different sports and its football and new baseball stadium (pictured above) are the nicest in town.
Posted by Richard Beene at 9:28 AM

When a newspaper headline is incorrect, the standard reply from the writer is that someone else writes the headlines. However, in a personal blog, that line of defense does not hold. And when the blog is from the president of a newspaper, well, ouch. In this article about BC, your headline is simply wrong. BC has not been "on the hill" for 96 years. That would mean it has been in its current location since 1913. However, right there in your article is mention that the college has been at its current location only since 1956, a mere 53 years ago. What I am happy to share with you is that its prior location was on the campus of Bakersfield High School, smack dab in the middle of the flat lands.

I stand corrected. Sometimes I write these things in haste and occasionally I screw up. It happens.

We just starting reading your blog about a week ago and because we're new in town we enjoy it. We live on the east side but really don't know much about the college. I didn't catch the mistake but big deal. Keep writing!