Coming off another wonderful weekend here in Bako, lots of things happening, hot but not (yet) unbearable. Let's get to it:

* ... NEW PARK, SAME HOMELESS: The newly renovated Central Park officially opened this weekend with high expectations. The city spent hundreds of thousands sprucing up this "needle park," long a magnet for the homeless, the drug addicted and generally the worst of our community. The Bakersfield Museum of Art is next door and has been awaiting the renovation with crossed fingers.... meaning: will the homeless and drug addicts simply return after all the ribbon cuttings are done? Even I wondered privately if this wouldn't turn out to be what an old boss once called a bad story pitched with a different angle: "You can give a bum a shave and a haircut," he said, "but he's still a bum." So I had to smile when I saw a Facebook posting by none other than John Harte, a former Californian photographer known for his strong opinions as well as his talented eye for a good photograph. He posted the following status message followed by the picture he took:

"Here you go. 24 hours post grand opening of the new "family oriented" Central Park and here's our first transient settling in. The public needs to trust their media for balanced coverage. Local media which glowingly promoted the park without balancing it with the long history of transients, alcohol and drug use and crime at the park has violated that trust." Touche, John! 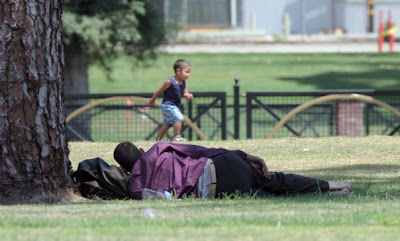 * ... BEAUTIFUL BUT BORING: Turned on the television Saturday night to find the "Beautiful Bakersfield" awards banquet being shown live. The awards were started by the Chamber of Commerce some years ago to honor folks who make our community proud, but since then they've grown into an endless and seemingly pointless series of awards for some of the most obscure categories imaginable. With all respect to some very deserving nominees and winners, watching the KGET-TV production was painful beyond words. Even KGET's Jim Scott and Robin Mangarin, old pros who do this for a living, could not breathe life into this DOA format. As they say down South: "this dog don't hunt." I just hope KGET is getting some credit to comply with FCC regulations that require the station to televise local content. Folks at the Chamber would do well to revisit the entire thing and reduce the number of awards and stop pretending it's the Oscars.
* ... CINDY'S FAREWELL: Californian columnist Herb Benham devoted his Sunday column to a fitting farewell to Cindy Pollard, a longtime Bakersfield resident and USC grad who is moving to Sacramento to take a job with PG and E. Cindy was always deeply involved in the community and will be missed.
Posted by Richard Beene at 4:14 PM

That park is been infested with drugs for years. The city is going to have to keep police there all the time to keep the drugs out. If they don't, they will return!

...from my pollyanna perspective this looks like a photograph of a dad settling in to watch his son romp in the park. how did mr. harte determine the status of the man?

I'm looking out at the park right now and there are several families having picnics, a few couples visiting, and I saw one possible "homeless" person there. Looks to me like the park is being utilized as it should be. If families continue to utilize it, the vagrants won't stay long. I guess I'm polyanna too.

I asked John Harte to respond to the above polynannas. His response follows:

"Fair point. I wanted to be sure so I walked up and took a look. He was laying on a worn back pack, he was in bare feet, he was wearing several layers of clothing including long sleeves (a classic transient trait) on a 90-degree plus day and he and his clothes were dirty. All symbolic of the hundreds of transients I have photographed or encountered in downtown Bakersfield. Still, I photographed him from behind because the point I was making wasn't about him; just because you are downtrodden doesn't mean you are a criminal and taking a nap in a park isn't a crime . It was that a citizenry needs to have full information about the park, especially one with a dangerous and troubled past, and I felt that was lacking in some of the media coverage."

A comment and a correction. Another reason the BBC awards are somewhat pointless is because its rules require nominees to promote themselves. After someone is nominated, the BBC contacts the individual to request he or she prepare a promotional piece (photos, videos, display board) to show the good work being recognized so the judges have something to judge. Why would someone who has done good work want to be self-promoting, and spend his or her own time and effort to get an award? Not sure why the nomination form does not ask for enough information so the judges would have what they need. Maybe this is why some nominees say thanks but no thanks, and why others decline to nominate deserving people, who will end up having to do more work to get an award. As for the correction: while the awards are now run by the Chamber of Commerce, they were started by the Beautiful Bakersfield Committee founded by former Mayor Mary K. Shell.