Weekend preview: start with "First Friday" and end up with the Menudo cookoff

Heading into the weekend and there's no shortage of activities. You can start with the energy that is "First Friday" with the downtown art scene, catch a couple of concerts and then nurse that hangover with the menudo cookoff on Sunday. Let's get started:
* ... GUN CLUB EVENT: The Kern County Gun Club holds its annual fund raising dinner Friday at the Elk's Lodge. Tickets are available at the door and it's always good for a solid steak and potato dinner. Doors open at 6 p.m. and dinner starts at 7 p.m.
* ... FIRST FRIDAY: This is always an event I hate to miss simply because our modest little downtown literally comes alive the first Friday of every month. Catch a bite to eat at Mamma Roombas and make sure to stop by Don Martin's Metro Galleries where you are sure to see a dozen or so folks you know. Metro is featuring the work of Tena Navarette, formerly Tena Cohn and ex wife of local plaintiff lawyer David Cohn, who is now married to the former Debby Brock. (need a flow chart yet?) Tena left Bako for the second home in Del Mar after the separation (says the air here doesn't suit her, like it suits any of us) and her stuff isn't my cup of tea but some folks seem to like it. Check out some of her work below. 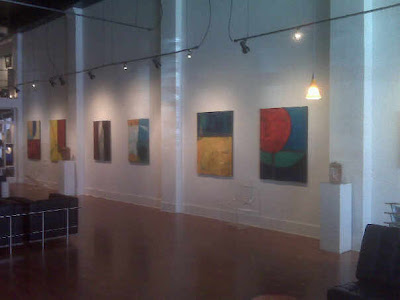 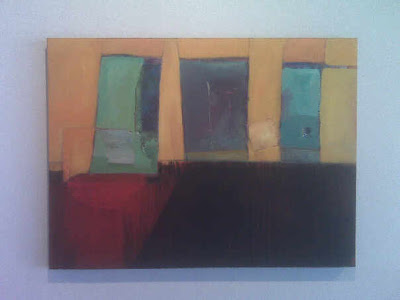 * ... VISUAL ARTS FESTIVAL: Make sure you also run by the Bakersfield Museum of Art to catch some of its Visual Arts Festival winners. I haven't seen this juried show but hear it is really first rate. The museum, under director Bernie Herman, has really hit its stride and continues to impress me. It also doesn't hurt that the newly renovated Central Park next door has opened. Maybe you can actually park your car without a vagrant hitting you up for dinner money.
* ... BARBECUE: On Saturday head over to Stramler Park for what is being billed as the "Biggest, Baddest Barbecue Championship." It runs from Friday afternoon and Saturday. Admission is $18 Friday and $8 Saturday. Beer and soft drinks will be available.
* ... PASS THE MENUDO: Finally, on Sunday from 11 a.m. to 6 p.m. is the 11th Annual Latino Food Festival and Menudo Cook-off at the Kern County Fairgrounds. Now, I've never taken to Menudo and suppose it's a Latino thing, but this is a popular event with lots of music, including the popular Mento Buru. It will cost you $8 in advance and $10 at the door. Enjoy.
Posted by Richard Beene at 11:38 AM

Your blog about the very talented Tena Navarrete sounds more like a bitter jab by a person resentful at the fact that they have to live in a town where the only interesting thing to write about apparently is gossip. Many people choose to leave Bakersfield, if not for better air quality and health, then art, culture, education....An interesting fact, Valley Fever, a debilitating respiratory illness is caused from the spore of a fungus that thrives in dry, dusty climates (hmmm....sounds like Bakersfield). More than 60% of Valley Fever cases were diagnosed in Kern County over the past 15 years. You failed to mention that Tena Navarrete was diagnosed with Valley Fever in the 1990s when the illness had reached epidemic proportions in Kern County. So yeah, I guess you could say the air got to her. Well, on the upside, Bakersfield is a great place for people who want to feel like they're a big fish in a small pond.
As far as her artwork not being "your cup of tea," I think we should thank her for bringing some much needed culture and talent to a place that is definitely lacking in it.

Tena Navarrete's work is shown all over the world with all positive comments. I am surprise to see that the writer takes a stab at her for leaving Bakersfield.
Is this the reasson why it is not his cup of tea?
I understand the reason for Ms Navarrete leaving Bako is because of health problems due to the environmental conditions. Should she have stayed and suck up the bad summer air and if she did would it have illicit a more positive comments from you.

As an admirer of her works I am glad that she left and she is alive today to share her fantastic artwork with the world.