Angelo can see! Doctors say victim of savage attack by his father may be able to see 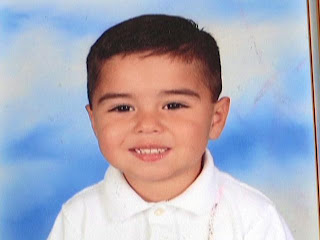 Here's some terrific news to start your weekend: the young lad who lost one eye when his father savagedly attacked him may not be blind in both eyes after all. The word comes in an exclusive report in The Bakersfield Californian (read full report here) by longtime crime report Steve Swenson. Because little Angelo Mendoza only recently turned 4 years old, the case is shrouded in secrecy, but Swenson learned the boy has regained some sight in his right eye and doctors say that should improve. The left eye is gone. His father literally ate it out in an April 28 attack that cops think was induced by a drug rage. Support from across the world has come to this lad and funds are being established. Meanwhile, there's not much sympathy for the dad, who after attacking his son starting chopping at his own legs and tried to tell cops he was the victim of a gang attack. The dad already was in a wheelchair because of a previous knife attack. And the mother? Well, she's missing and wanted on some drug related charges. What a joy to pick up today's paper and see a screaming black headline: "ANGELO CAN SEE."
Posted by Richard Beene at 6:44 AM

hope that they r careful for who has the custody of angelo jr. they should check his story.