Economic outlook for California is bleak, but Bakersfield poised to be among the first to recover

In these times we take every nugget of good news, embrace it, rub it like a genie's lamp for good luck and hope more good tidings come tomorrow. So I'm celebrating a report in the Sacramento Bee today (thanks to Ray Karpe of Karpe Real Estate for passing it along) that says while the economic outlook for California remains bleak, Bakersfield will be first major California job market to recover within two years. The story quotes projections from IHS Global Insight, an economic forecasting firm, and paints a fairly bleak outlook for the country as a whole. (read the full story here) But hey, we're looking for signs of hope, right? So I'm going to celebrate the fact that - for reasons not explained in the story - only Bakersfield will recover within two years. The rest of California is much farther out. Some excerpts from the story:

"The areas poised for a jobs rebound later this year are: Anchorage, Alaska; Champaign-Urbana, Ill.; Coeur d'Alene, Idaho; Columbia, Mo.; Laredo, Texas; and the Houma-Bayou Cane- Thibodaux areas of Louisiana.
"Only five areas are expected to see a similar jobs recovery in 2010: Las Cruces, N.M., and El Paso, San Antonio and the McAllen-Edinburg-Pharr and Austin-Round Rock areas of Texas.
"Most of the country – 286 of 325 metro areas covered in the IHS analysis – aren't likely to regain their pre-recession employment levels until at least 2012.
"Of these areas, 112 probably won't return to their recent peaks until 2014 or later. These include Rust Belt towns such as Cleveland, Dayton and Akron, Ohio; Detroit, Warren and Flint, Mich.; the hurricane-ravaged Gulfport-Biloxi, Miss., area; and the greater Los Angeles region, where the housing bubble and high unemployment have strangled the local economy.
"Already hard-hit by the economic downturn, the outlook for California is bleak. IHS Global Insight predicts Bakersfield will be the only California job market to recover within two years. Sacramento won't recover until early 2013; Los Angeles not until sometime after 2014.
"Overall, more than 70 percent of California's workers live in metro areas that won't fully recover until at least 2013, the study found. 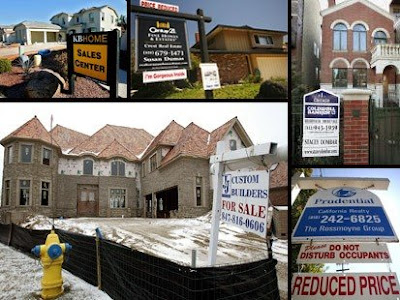 Meanwhile, I heard from Watson Touchstone Realtor Mary Christenson today, following up on my earlier post about low appraisals torpedoing house sales across Bakersfield. Mary passed along an email from Charles McMillan, president of the National Association of Realtors, detailing his plans to meet with officials at the Federal Housing Finance Agency to clear this logjam. Talk to any Realtor in town on you will hear the same gripe: we have willing buyers and sellers, but the banks and appraisers are all under such pressure that appraisals are consistently coming in low, effectively scuttling deals and pushing us farther away from a rebound. Ugh.
Posted by Richard Beene at 2:59 PM