Bako Bits: Brain drain at the county, more drunks on the road and a bid to spike car sales

Cleaning off my desk preparing for a little vacation on the other coast. Wish I had better news on the local economy but it's chugging along the bottom, not getting any better but not getting much worse either. Let's wrap up some loose ends:

* FATHER OF THE YEAR? ... Just as we suspected, the driver who crashed head-on into another vehicle on Enos Lane on Sunday was drunk, according to the cops. And I suppose it should come as no surprise that the driver, 27-year-old Pedro Munoz of Delano, had been arrested on drunken driving charges two years ago. The tragedy is that Pedro's lack of responsibility led to the death of his wife and his two daughters, and the injury of a family of innocents in the truck he hit. Pedro's first mistake was driving drunk and his second - and fatal - mistake was trying to outrun a CHP officer who clocked him going 83 mph on Enos. Father of the year? Don't think so. By the way, that stretch of Enos between Panama Lane and Stockdale Highway is always treacherous. You have traffic heading to Interstate 5 and then trucks towing boats and RVs coming from the Lake Buena Vista Recreational Area. Be careful out there. (photo below courtesy of KGET TV) 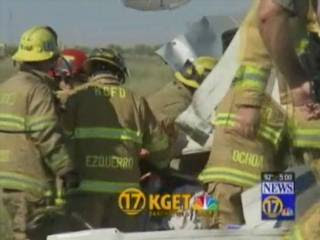 * COUNTY BRAIN DRAIN ... Didn't want to let it pass without noting the pending retirement of David Price III, the chief of the Resource Management Agency. Dave is a longtime county bureaucrat and a good one at that, and it never hurts when you are blessed with a keen sense of humor and wit. Dave is heading to the bucolic hills of east Tennessee where his wife has family. He's worked at the county for 21 years. Price joins a number of other longtime county employees to leave recently, including County Counsel Bernie Barmann, waste management director Daphne Harley and Schools Superintendent Larry Reider.

* CLUNKERS FOR CASH ... Nice piece in today's Californian on the "clunkers for cash" program aimed at getting high polluting cars off the road. Turns out the California New Car Dealers Assn. is advising members to hold off until details can be worked out. One dealership eager to get in on the deal is Jim Burke Ford, where general manager Dan Hay reports a lot of interest. The deal: you get up to $4,000 for a trade-in toward the purchase of a new more fuel efficient vehicle but there are some small hiccups the program has to hurdle. Questions? Call your local car dealer for details.
Posted by Richard Beene at 10:07 AM

Pedro was thought to be under the influence but the test results came out negative. Those charges have been dropped. No doubt he made bad choices. He was cleared about the DUI. He was irresponsible and he lost his Stepdaughter, his son, and his wife due to his poor choices. He also injured his sister in law and those in the other vehicle. GET YOUR FACTS STRAIGHT if your going to have a newspaper.