No place for "green" here: Fresno top "green" city in Valley; Bakersfield (surprise!) down the list

It seems like an exercise in futility: studying which cities in the Central Valley are the "greenest" in terms of land use, zoning, transportation and economic development. Let's face it: the only thing "green" in this Valley are our magnificent farms that make us the country's bread basket. (We ain't got no stinking green here!) The rest of the story - our air, our congested roads, our short-sighted policymakers who have always put growth ahead of planning - would hardly qualify us as "green" in the environmental sense. (Now, green in the economic sense - read that profits - is another story) So I read with interest a story that, according to a study by UC Davis, Fresno came out tops among 100 Valley cities in terms of "the greenest ideas for growth over the next three decades." (read complete Fresno Bee story here) I'm still scratching my head because it's hard to imagine any cash-strapped Central Valley town as being "green" in any sense, but I suppose if you grade on the curve, then someone has to come in first. Lead author Mark Lubell suggested revising Prop 13 (good luck) which he said led to more uncontrolled growth. Said the story:

"These issues soon will become more important, Lubell said. The Central Valley -- which includes the San Joaquin and Sacramento valleys -- is forecast to expand from 7 million to 12 million residents by 2040, making it one of the fastest-growing places in America. For the last 18 months, Lubell and a team of researchers looked at Central Valley cities to see whether they are preparing for sustainable growth. In the study, sustainable growth refers to such factors as air quality, ground-water recharge, high-density residential land use and renewable energy sources, such as solar." 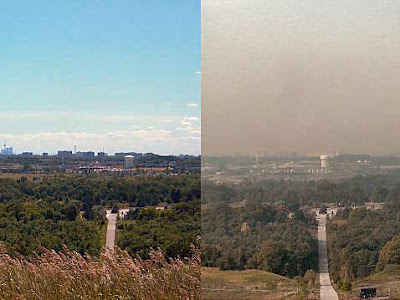 Bakersfield apparently ranked No. 9 on the list, which in itself proves the bar wasn't set too high. Bako does have recycling, but it was only adopted after a couple of civic activists shamed the City Council into acting, and the percentage of folks who pay next-to-nothing for the blue recycling bins is abysmal. This has always been a community that has prided itself on being one of the cheapest places in California to live, and now we're living with the consequences: thousands of those cheap homes are in foreclosure, the roads remain congested and air is foul. And so it goes.

(photo of garbage truck courtesty of The Fresno Bee)
Posted by Richard Beene at 2:24 PM

Don't ignore the important "green" aspects of all those farms which, lets face it, are vastly more "green" than a shopping mall. The pesticide misuse gets all the ink but in reality, farms are much more "eco-friendly" than ever before and even the pesticides used are much milder, more benign than ever. Not to mention all the conservation efforts, solar power, wind power and other "green" practices that are becoming more popular - IF they are cost effective. Farmers are extremely hesitant to promote themselves on these issues.
Surprised Kern's water banking/recharge programs didn't get more attention - we're a world model for groundwater banking although few here even know we do it.

All good points. I agree that farmers never get the proper credit for being good stewards of their land. Well said.

Look also at the numbers of LEED (Green Building) registrations funded by "for profit" owners. By that measure, Bakersfield is in a four way tie for first place
along with Davis, Roseville, and Stockton.

Presently, our only "green" government building is the proposed Federal Courthouse! The other eight projects are all for private, tax-paying owners.

By the way, the Metropolitan Recycling Corp and the City/County stormwater/aquifer recharge rulesmake getting those valuable LEED points a cinch.

Logic check on recycling: When there is no demand for recyclables (cardboard has dropped in some places from $120 to $20 a ton because China doesn't need it to box up products Americans are not buying) perhaps recyling is a waste of resources and a salve to make us feel better about driving an SUV to the gym where we consume electricity on the treadmill in air-conditioned comfort. Read John Tierney's 1996 article, "Recycling is Garbage."