The consequences of drunk driving: another "life interrupted" while a local program gets some much deserved recognition

Received a lot of email and comments on the death of Kathy O'Daniel, the 54-year-old Bakersfield resident who was killed in an apparent drunk driving incident outside Santa Rosa. Kathy and her husband Chuck lived in Bakersfield for years, raising five kids and always remaining active in their church, and they left behind many friends. Kathy was invariably cheerful and a terrific, devoted mother, and folks were understandably stunned to hear of her death. (read the previous post here) Services have now been set for Saturday, Sept. 26, at 11 a.m. at Calvary Chapel Petaluma, located at 1995 McDowell Boulevard. Meanwhile, I hear that Kathy's 15-year-old daugher Kelcee, who was injured in the accident, is doing better but has a long recovery in front of her.
Given the latest tragedy it was good to learn that the local effort to spread the word on the dangers of drinking and driving won some much deserved recognition. The program is called "A life Interrupted DUI Mobile Crash Exhibit" and is run by the Bakersfield Police Department and some concerned citizens, including local businesses like State Farm Insurance, Hall Ambulance, W.A. Thompson and families who have lost children in traffic crashes. The program was just named the California Crime Prevention Program of the Year, a well deserved honor for these folks who have worked so hard. One of those involved is Nancy Chaffin, the Californian's Human Resources vice president who lost her own son Jeff in a DUI incident eight years ago. In that incident (Jeff was not driving) Jeff was among four teenagers killed when Michael Hugh Curtis crashed on Seventh Standard Road. The program started in 2002 and involves taking the wreck of a car to local schools and showing kids what could happen. I've seen the presentation and it's a moving and (hopefully) effective program.  (that's a picture of the trailer below) 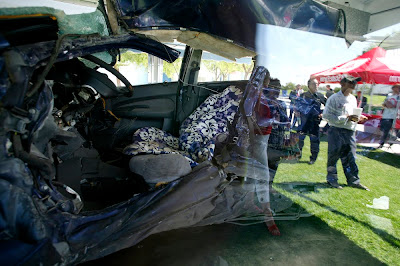 Police chief Bill Rector  has thrown his full support behind the program as have companies like Three-Way Chevrolet, which donated a new Chevy truck, and State Farm which threw in $68,000 to build the trailer. Every death is tragic, and no one affiliated with the program is claiming this is a panacea, but it is encouraging that only one teen died locally in an alcohol related accident in 2007, compared to 12 in 2002. There was also an 18-month period between 2007 and 2008 when there wasn't a single teen killed. 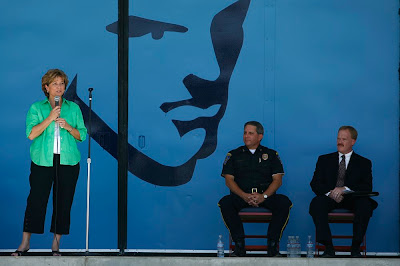 Another sysmpathetic charity for the haves any leftovers likely will be used to find more way to put the have nots in prisons already filled past the limits of decency. What you really ned is drug and alcohol diversion programs for those people like Rector profile and target.

yeah diversion would have helped michael curtis, except he would still be in prison for multiple rape charges, besides, prison is a diversion...noone ever killed someone driving drunk while they were in prison.

The first post is ridiculous. how is that program a "charity for the haves?" good grief!

You clowns make my point, you cannot see beyond the badge, there are other people out there and many kids that will grace these pages for you to ridicule, in the usual Bakersfield fashion.
You get what you pay for you fools!

Not sure where this thread started or where it's going but why pick on the "badge" when all these folks (BPD and the volunteers) are doing is trying a (least in my opinion) sensible approach to educating everyone about the dangers of alcohol and driving. No one is being ridiculed here. I'm not sure I understand where you are coming from, or your point.

Driving drunk is a choice and it matters little whether you "have" or not. Choices come with consequences - some are life altering and some are deadly. That is what A Life Interrupted is about. Anonymous, not sure what your point is, but the BPD, through educational programs like this are trying to keep you and your family alive.

I was a visitor at a school where the trailer was presented and parents of children who had died in DUIs were on hand. It was a striking and remarkable experience to see the students swarm around the trailer and see the awful damage done to the car inside. It's an excellent program -- anything that causes young people to think more carefully about their choices involving alcohol and driving is a good thing. Thanks to State Farm, to Hall Ambulance, the BPD, WA Thompson and to parents such as Ms. Chaffin, who contribute to stopping this epidemic of alcohol-related deaths in our community. Kudos to them all.

The car you all see in the trailer exhibit did belong to my now deseased grandaughter. I am one of the speakers that talk at the 'Life Interrupted' presentations. #1 to that person that think we are clowns, regardless if you were talking about the BPD or who, when you address 'you clowns' your including me. I am not a BP but a grandmother that lost my grandaughter because of a drunk driver, now who's the FOOL? Believe me, I hope and Pray nothing happens to you or someone in your family like it did to my family. You didn't make any mental sense what so ever in your post. I would much rather have a Bakersfield Police Officer standing behind, beside or in front of me, rather than someone that is heartless like you. You don't know, but I know of at least one Officer that has experienced a tragidy similar to mine, and just because he is a Police Officer it don't make it any easier. It has been 3 years today my 18 year old grandaughter had her life taken at the hands of a FOOL, regarless if he meant it ir not. At three years that tragic night is still fresh and has changed ever aspect of our lives forever. While you wake up every morning, and ever morning you start your day the same way. Think about me waking up the day after I've been told my grandaughter was killed. Every morning from then on is not the same as it was the morning before that call. WAKE UP and realize the pain your neighbor or a friend might be going through. If your guilty driving while intoxicated then don't try to put the blame on someone else, if thats the case, then ONE DAY you will see a different kind of bar in front of you.

How forgiving would we be if a drunk person shot and killed someone in the middle of an intersection with a high powered rifle instead of a 5000 lb. car.
A drunk driving a 5000lb car through an intersection, on a red light, at the rate of 60-70mph and crashing into another car has the same outcome as a high powered bullet exploding through a car window killing the driver.
To some people it is a accident when a drunk driver kills, but accident or not my grandaughter is still dead!