From the archives: when a picture is worth a thousand words about the manufacturing muscle of America 60 years ago

Thought I'd share this wonderful historic photo of the Ford, Willow Run factory that turned out B-24 bombers during the Second World War. Local historian George Gilbert Lynch circulated the photo and explained the assembly line was located near Detroit Michigan and was a mile long. According to George, the B-24's were made by Ford Motor Co. via license from the Consolidated Aircraft Co.of San Diego. The plant covered 80 acres and employed more than 40,000 people. The photo is from the Library of Congress. Said George: "This Ford, Willow Run factory ran 24/7 during WW2 and shows how we won the war. Every 56 minutes another B-24 Liberator Bomber rolled off the end of the assembly line. We could build them faster than the Axis could destroy them." 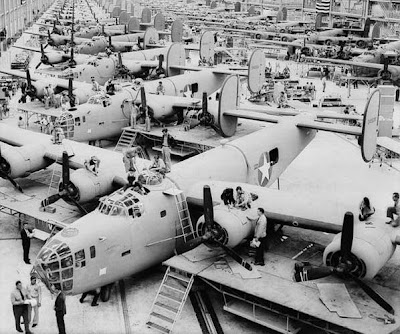 Posted by Richard Beene at 1:31 PM

Email ThisBlogThis!Share to TwitterShare to FacebookShare to Pinterest
Labels: B-24 Liberator, George Gilbert Lynch, Will Run