"Crossing the Finish Line:" the promise and the failure of our public universities, and why it matters

<
Came across an interesting book review in today's New York Times (read it here) along with an accompanying story on the state of our public universities and the important role they play. (you can read that piece by David Leonhardt here). The book is called "Crossing the Finish Line" and it paints a distressing picture of how few of our kids who enter college actually graduate. One of the issues is what the authors call "under matching," meaning large numbers of students don't attend the most selective schools but rather one that is closer, costs less or is simply more convenient. Leonhardt begins: 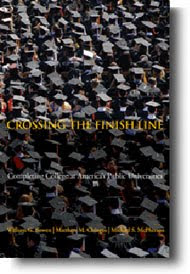 "At its top levels, the American system of higher education may be the best in the world. Yet in terms of its core mission — turning teenagers into educated college graduates — much of the system is simply failing.
Only 33 percent of the freshmen who enter the University of Massachusetts, Boston, graduate within six years. Less than 41 percent graduate from the University of Montana, and 44 percent from the University of New Mexico. The economist Mark Schneider refers to colleges with such dropout rates as “failure factories,” and they are the norm.
"The United States does a good job enrolling teenagers in college, but only half of students who enroll end up with a bachelor’s degree. Among rich countries, only Italy is worse. That’s a big reason inequality has soared, and productivity growth has slowed. Economic growth in this decade was on pace to be slower than in any decade since World War II — even before the financial crisis started.

"He continues, though, on a note of surprising optimism:
"For all the book’s alarming statistics, its message is ultimately uplifting — or at least invigorating.
Yes, inadequate precollege education is a problem. But high schools still produce many students who have the skills to complete college and yet fail to do so. Turning them into college graduates should be a lot less difficult than fixing all of American education."

This is an important book and one can't help but wonder where Kern County fits into the scheme of things. We suffer from a high school dropout rate approaching 25 percent, and last I heard only 11-13 percent of Kern County adults had graduated from college. An even smaller percentage of our kids go away to four year schools, but there seems little doubt that we too suffer from "under matching," meaning that of the high achievers we produce, most will settle for far less selective schools simply because of their family's inability to pay today's skyrocketing tuition rates at top tier public schools. It's worth our time, and our consideration, to find ways to get all our achieving kids into college, and into the best school they deserve.
Posted by Richard Beene at 1:47 PM

I noted your post today that stated "11-13 percent of Kern County adults had graduated from college." The Census Bureau estimates are a tad better, but not much, and I am happy to pass them along to you.
The percentage of residents who have attained a Bachelor's Degree, or higher:
* Kern County: 14.4%
* City of Bakersfield: 19.7%
* State of California: 29.1%
* U.S.: 27.0%

The source of these data is the U.S. Census Bureau's "2005 - 2007 American Community
Survey 3-Year Estimates." I hope you find this information useful.
>
David Lyman

David:
thanks for the post and the correction. I've seen various figures but all in this range, so I can't argue with the Census. Appreciate the input...

Some people, Charles Murray included, have suggested that too many people are actually going to college and that a large number of are unable to understand the reading and lectures in college. Maybe that's one reason that they drop out. See Murray's article, "The American: The Journal of the American Enterprise Institute" available online, for Sept. 8, 2008. Assuming that college is for everyone may be a fallacy. But by all means, let's "find ways to get all our achieving kids into college, and into the best school they deserve," whatever that means.

It seems clear to me that not all kids are ready for college, or even should consider college. If you look at Kern County, we have a lot of kids who either can't or shouldn't go to school but maybe a trade would be something they could do. I agree that not everyone is ready for college

I liked the student who said, "Finishing college in four years is like leaving the party at 10:30." Happy to see the Bakersfield rate is probably over 20% now. Many of those are most likely first generation grad, too, so the future is bright. Laura Wolfe self proclaimed Education Attainment Advocate