Lost jobs, lack of insurance and a struggling real estate market: taking the economic pulse of our community:

I don't pretend to be an economist, but I do listen when I'm out and what I'm hearing these days indicates an economic stagnation of a depth unseen in our generation. Some snippets of where we are:

* ... THE ECONOMIC CRISIS ON TRUXTUN EXTENSION: Had a chance last week to visit with Dr. Raj Patel of Preferred Family Care Physicians over off Truxtun. Patel has been our family doctor for years and I'm an unapologetic fan of his practice, which teams him with Dr. John Heidrick and office manager Teri Reyes. I was there getting my semi-annual allergy shot, and Patel shared with me that his practice is off 10-plus percent because of this economy. Why? First, many folks have simply lost their jobs and with that their health insurance. So they're gone. Second, many companies have pushed their employees to high deductible plans where the employee pays the first $2,000 or $2,500 in health care out of their own pocket. With money as tight as it is, folks simply aren't showing up at the doctor's office for every ailment. And lastly - and this was a tad surprising - Raj said even some folks with insurance are delaying visits because they are so strapped for cash. The result: fewer people in the waiting room and no doubt some folks who should be there are not. (Patel is third from right in this group photo taken when Preferred Family was honored by the Red Cross as one of our community heroes last year) 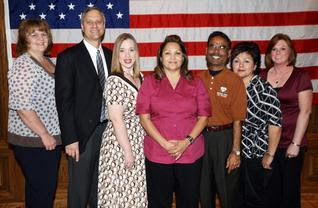 * ... VIEW FROM A CUSTOM BUILDER: Got a nice email from Dave Turner, owner of Turner Custom Homes, giving me his take on the real estate market. Dave is one of the high-end builders who has been sucker-punched by this downturn. I had cited Dave in an earlier post (read it here) and he wanted to clarify a few points. In his words:
a)The upturn in new home construction is mild, and mostly in the entry level due to the stimulus.
b) The market locally seems in balance between buyers and sellers, which should stabilize prices somewhat. The foreclosures may keep values down for quite a while, but banks seem to be metering out their REO’s (Real Estate Owned, i.e. foreclosures) so they don’t flood the market and push prices lower;
c)The study I cited from San Diego was from a builder publication noting that the head of the Dept. of Real Estate at a San Diego university (don’t recall which) predicted that values in the San Diego market would not return to 2005 levels until 2016. Real estate is local, and what is true elsewhere may or may not be true in Bakersfield. I cited it only as an indicator of what we might expect “value-wise.” I don’t expect our activity level will ever get back to where we were during the giddy days.
d)Regarding the higher-end, I don’t think I mentioned a National Assn. of Home Builders publication that predicted the higher-end market won’t return until 2012. Again, that is a national prediction, and may or may not be true here – just another indicator.

* ... LOCAL BOY PUNTING FOR THE HUSKIES: It was good to see Will Mahan, a product of Bakersfield High School and Bakersfield College, on the field and doing well as a punter for the University of Washington Huskies this weekend. Thanks to retired endodontist Dr. Bob Smith, himself a Driller dad, for pointing this out to me.
Posted by Richard Beene at 12:33 PM