City manager says get ready for more traffic snarls and yet more feedback on nicknames: Backwardsfield?

* ... TANDY REPORT: City Manager Alan Tandy spoke to the downtown Rotary Club Thursday and passed along some interesting tidbits. First, Tandy said we should all prepare for a flurry of major road work around town as stimulus money is put to work. This is money tied to creating jobs so the city has to spend it promptly. Resurfacing on a number of major arteries will begin after the rains. Tandy also noted that one sure sign of the recession is the marked decrease in the amount of garbage and trash being generated, and the hauls remain lighter than usual, a sure sign the recession is lingering. And lastly, he warned we should all prepare for more DUI checkpoints since that is one area that is still receiving healthy federal funding. He said the city will average about six DUI checkpoints a month. 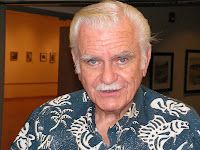 * ... FAREWELL CLAUDE: The funeral service for retired petroleum geologist and engineer Claude Fiddler was a fitting tribute to a remarkable man. The service was held at Greenlawn Memorial Chapel and followed by a special "toast" on the Panorama Drive bluffs overlooking the Kern River oil field. In a moving tribute to the Navy veteran,  granddaughter Sarah Ross sang "Anchors Aweigh" to wrap up the service. The Fiddlers (his wife Shirley Ann died just a few  weeks before Claude) were generous benefactors to a number of non-profits including the Golden Empire Gleaners, Southern Sierra Boy Scouts, Bakersfield Museum of Art and Valley Public Radio, to name a few.

* ... BACKWARDSFIELD? OUCH! This from reader Jerry Cox on nicknames for our hometown. (His comments will no doubt get a response.) "No doubt you've heard this one before. My favorite pet name for Bakersfield is Backwardsfield. As I travel around this great state, I'm often asked 'Where are you from?.' I usually reply that I am originally from the Midwest but that I now live in Backwardsfield. That usually results in getting a wink, or a nod, with a knowing smile, as a reaction. Just passing this on. You may not want to share this with your readership. But, as you media people would say, 'Just reporting the news, not making it.'  I can only speculate on why I get this response. Deserved or not. Editorially speaking, after living here eight-plus years, I would say deserved. As TBC would write -- These are his opinions, not necessarily The Californian's."

* ... BROWN MATERIAL ROAD: And then there is reader Anne Grogan, who said that "no one should be so insecure that they are afraid to inform people they are from Bakersfield. After all, it isn't as bad as telling someone you reside on Brown Material Road!"
* ... THE BUZZ: There is a lot of talk going around town that Trader Joe's may be leaving the Southwest to relocate to the Northwest Promenade on Rosedale Highway. I'm not sure where this rumor started and the folks over at Trader Joe's say there is no truth to it, but it nonetheless has a lot of people upset. Negotiating Rosedale Highway and dealing with the traffic at the Promenade is no fun, and many loyal Trader Joe's folks want it to stay exactly where it is. We'll keep an eye on this one.
Posted by Richard Beene at 3:41 PM

Thank you Lord, for allowing me to have Claude Fiddler in my life ...

I remember when Claude drove a truck for the Gleaners. He was a very generous man and may he rest in peace!