The generosity of Dean and Adah Gay, Crabfest 2010 and funeral services set for Dr. John Lang and Claude Fiddler

* ... A LOCAL FAMILY'S GENEROSITY: Bakersfield College will be dedicating its newly renovated and expanded sports complex on Thursday, February 4. This is a striking new facility, for both baseball and softball, and the opening will feature a Lady Gades softball game. But what is really important is the couple who made all this happen, Dean and Adah Gay. It was their generosity that allowed the school to expand, yet another example of how local folks open their wallets to help our local institutions. The actual dedication of the new "Dean and Adah Gay Sports Complex" will be held at 5:30 p.m. at the corner of University Avenue and Haley Street in the Northeast. Bakersfield College is just one of a long list of local institutions and non-profits that the Gay family has supported.

* ... CRABFEST 2010: I attended the annual "Crabfest" fund raiser Friday night to benefit St. Francis School. It was a huge event, coordinated and run by a tight-knit group of St. Francis supporters and Junior Leaguers and held at Harvest Hall at the Kern County Fairgrounds. It was amazing to watch this group open their wallets during the silent auction, egged on course by the charismatic Monsignor Craig Harrison. Last year I'm told they raised some $160,000 and I'd be surprised if they didn't top it this year. Lots of folks were there, including Diane Lake, Lee and  Kryssy Jamieson, Kelli Gruszka, Rep. Kevin McCarthy and wife Judy, John Sacco and Dr. Rob Waguespack, David Morton, Steve Houston, Lydia and Jon Rowles (pictured below) and many others. 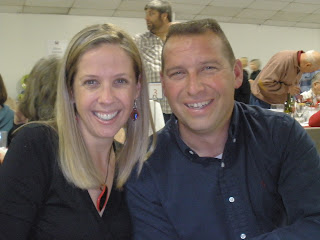 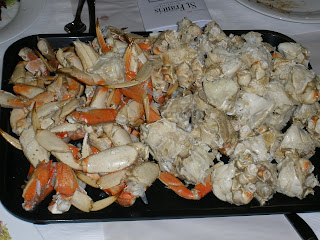 * ... BAKERSPATCH? I got a nice email the other day from local resident Mike Schield, who describes himself as a Bay Area transplant who has lived here for 13 years and (thank you Mike) a regular reader of BakersfieldObserved and The Californian. In his words:

"It's been most interesting to read all the kibitzing re Bako, B-town etc. Loretta (his wife) has been encouraging me to put in my two bits worth, so here goes. Frequently in discussion with my buddies for lo these many years, I refer to our community as Bakerspatch. I know it's a little corny but Loretta and I both think that one of the beauties of our country is that it's okay to be a little corny! Helps grease the slides! Also when I'm addressing local mail, I use Bfld. Try pronouncing that one! Keep up the great work, Richard."

* ... CHURCH RETURNS: Among those who have moved away from Bakersfield only to return is Jack Church, back as the meteorologist at KERO TV 23, replacing the retiring Rusty Shoop. KERO anchor Jackie Parks told me she started working at 23 with Church in January of 1999 but he left in 2001 to be the meteorologist of a Time Warner 24-hour channel in Syracuse, N.Y. I gave Church a call and he told me leaving was a mistake and he is thrilled to be back in Bakersfield. He's originally from Tennessee (as am I) which makes him a life-long Volunteer fan, even if he did graduate from Mississippi State University. Jack and his wife Pam have two children, including a son Eric who goes to school at Florida State University in Tallahassee, and daughter Hannah, an eighth grader. Welcome back, Jack.

* ... FUNERAL SERVICES: Local Westchester doyen Bettina Belter called to let me know that a funeral service for Dr. John Lang will be held this Thursday at 2 p.m. at St. Francis Church. Lang, 64, died of a massive heart attack on Jan. 18 in Hawaii, where he had attended his niece's wedding. He was a longtime plastic surgeon with a wide circle of friends and an avid Pittsburgh Steelers fan. His office was on 21st Street in Westchester. Also on Thursday at 2 p.m., services will be held at Greenlawn Cemetery for Claude Fiddler, the retired Chevron engineer who died just a couple weeks after his wife Shirley Ann passed away. Keep both of these families in your thoughts.
Posted by Richard Beene at 12:47 PM

Just a heads up that the Gay Family legacy lives on at CSUB, too. The new reader board on Stockdale Highway was made possible by the Gay family in honor of Dean and Adah.

Loretta are honored that you would print our little kibitz !! We were really tickled when we saw it in the paper this morning !! I'm most apologetic to make this next comment, and it's definitly a tiny item, but the 3rd from last sentence was supposed to be Bfld, instead of Bfield. Thank you again Richard !! You and your staff are doing a wonderful job !! Take care, Mike

Mike: Thanks for the note and will correct it online. Sorry for mistake!