* ... COMMERCIAL REAL ESTATE: I read a disturbing piece the other day about just how much worse things can get not only with residential sales but also with commercial real estate. One expert, Andy Miller, argues the worst is yet to come, particularly in the commercial sector. (read the entire post here). On the residential side, the number of foreclosures remains staggering particularly in an area like the Central Valley that has been so hard hit. No one predicted we would be out of the woods this year, but Miller paints a frightening picture. An excerpt:

"The public doesn't have any idea of the scale of the guarantees the government is taking on through Fannie, Freddie, and FHA. It's huge. If people understood what the federal government has done and subjected the taxpayers to, there would be a public outrage. But you can't get people to focus on it, and it's very esoteric, it's very hard to understand. But it's not something the bond market won't notice. The government can't keep doing what it has been doing to support mortgage lending without pushing interest rates way up.
"Refinancings of single-family homes are very interest-rate sensitive. Consumers have their backs against the wall. They have too much debt. Refinancing their maturing mortgages or their adjustable-rate mortgages is very problematic if rates go up, but that's exactly where they're headed. So anyone who's comforted by current statistics on single-family homes should look beyond the data and into the dynamics of the market. What they'll find is very alarming."

So hang on, we've got more rough road ahead. 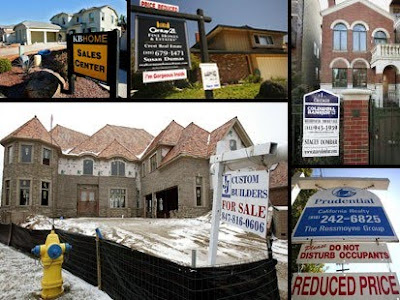 * ... ST. FRANCIS SCHOOL: Cynthia Meek, principal at St. Francis Parish elementary school, emailed to remind me that the school's annual Crabfest fund raiser this past weekend was organized by the Parent Teacher Organization and not the Junior League. I had mentioned the Junior League in an earlier posting on the event, noting that many of those working Crabfest were Junior Leaguers, but didn't mean to imply the League was a sponsor.  "I only mention this because I do not want to confuse our parishioners who support our school and the community businesses that support our school.... The Crabfest is the main fund raiser of the PTO and all profits go directly to the school to help underwrite the cost of education,"she said.

* ... BAKO OR BUCKERSFIELD? Reader Don Palla weighed in on Bakersfield nicknames, asking if I had "totally forgotten about Buckersfield after Bako legend Buck Owens? That gets my vote!" And another reader, Molly Sabat,  noted that when "my husband and I were preparing to move here from Ventura in 1996, my little brother Kevin McKean started throwing out Baker-tucky. I think I like it." Thanks for the feedback.

* ... MORE BAKO TALK: Lee Webb, professor emeritus of math at Cal State Bakersfield, sent me a thoughtful note on the debate over nicknames. In his words: "I'm enjoying the discussion about Bakersfield's name and the possible variations used.  I believe that you have mentioned the use of Stockdale, CA., but if not, I remember when I arrived in town in 1971 to start my teaching career at CSUB, I wondered what would happen if I put Stockdale, CA. 93309 instead of Bakersfield, CA. 93309 on a letter?  Stockdale sounded so much better.  After all, I believe if you addressed a letter to Oildale, CA. 93308 that is would arrive in a timely manner.

"Also, when my son and I were in Mammoth skiing in December, I noticed one of the lift operators had a name tag with her name and 'Rosedale, CA.' under it.  I did not remember any Rosedale, CA, so I asked her if she lived in Bakersfield.  She said yes, but she didn't like to advertise that she lived in there, so she had them put Rosedale, CA on her name tag.  She thought that was better as she had recently graduated from Liberty High School and lived in the 93312 area code.  Would a letter addressed Rosedale, CA 93312 get to her?  Having been raised in Santa Barbara, which is considered a garden spot of CA, I even tried to disassociate myself with Bakersfield by thinking about Stockdale, CA when I first arrived.  It seems as though some young people are still trying to do so.  Now I appreciate Bakersfield more, particularly the very nice, friendly people.  I would prefer more Santa Barbara type weather, but I tolerate the heat and fog."

* ... MUSEUM ON THE RADIO:  David Gordon is the assistant director of The Bakersfield Museum of Art, a local artist himself and one of the wittiest people I know. So it was nothing short of a stroke of genius that the Museum decided to partner with 101.5 KGFM radio to put Gordon on the radio every Wednesday, teamed with the sibling morning hosts Rachel and Dustin Legan (photo below) to talk about gossip, local entertainment and local happenings. It's called "The Scene" and it will debut today (Wednesday) at 7:40 a.m. and will air every Wednesday at the same time. I'm tuning in, and suggest you do the same. 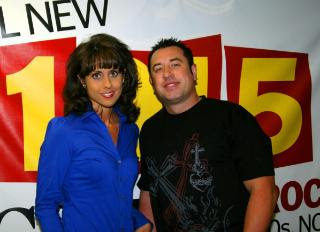