* ... BRAIN DRAIN: Reader Elaine McNearney wrote to tell me about all the alumni from University of California at Santa Barbara who call Bakersfield home. Apparently there are so many local kids applying to UCSB that Bakersfield is one of the few communities with a full-time UCSB staff person, working primarily at South High but also at Bakersfield High. McNearney said Catalina Mendiola works to help kids through the maze of paperwork required to be admitted to the UC and tries to identify students who qualify for the Research Mentoring Program targeting students from different disciplines. In addition, she said "a group of UCSB alumni are trying to locate other Kern County alumni and plan some social activities. So if this little ditty makes it to print please plug our brand new FaceBook page ...UCSB Alumni of Kern County." Any other Santa Barbara alums out there?

* ... RIP ARMANDA BOSLEY: If you have lived in Bakersfield any length of time, you will remember the old Baker Street location of Lou Ella's Children's Boutique, which catered to generations of local families. One of the long-time former co-owners was Armanda Bosley, who died of a heart attack last week. She was 95. Reader Greg Cowan wrote to tell me of her passing, calling his aunt "a Bakersfield  institution" who worked alongside her daughter, Brenda, to serve thousands of local families. Bosley's parent's immigrated from France, and her father opened what would become the original Pyrenee's Bakery. After school, a young Armanda would deliver fresh bread to customers on her bicycle. She and Brenda purchased Lou Ella's in the 1960s and it served our community well for over 40 years. (The store later changed hands and moved to the Southwest). If you have memories of Armanda or Lou Ella's on Baker Street, feel free to email me and I will share on this blog.  Keep this special family in your thoughts.

* .. NO NAME BAND: It's always nice to see local folks getting together for a worthy cause. That's what happened over at B. Ryder's bar and restaurant on White Lane Thursday when the "No-Name Band" was scheduled to play for a crowd to support the Bakersfield Ronald McDonald House at Memorial Hospital. The leader of this Baby Boomer band is Dr. John Heidrick, who along with Dr. Raj Patel owns Preferred Family Physicians off Truxtun Extension. You will no doubt recognize some of the "No Name Band" members: Jill Harlander on vocals, Jerry Stewart on guitar and vocals, Tim Montgomery on drums, harmonica flute and guitar, Leslie King on bass, John Brock on drums, Mike Hall on lead guitar, Michael Bell on rhythm guitar and Dr. Heidrick on guitar. 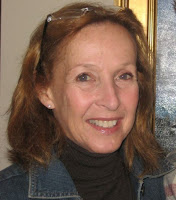 * ... VALLEY PUBLIC TV: Learned the other day that Esther Brandon, a former local First Five Kern Commissioner, has been appointed to the Board of Directors of Valley Public Television. This is yet another indication of how KVPT is reaching out to the south Valley, and Kern County in particular, to gain support through partnerships and collaborative efforts. Brandon is active in Temple Beth El off Panorama Drive, has two boys (one at the University of Colorado and the other a senior at Garces Memorial High School, not to mention a sweet yellow lab named Blue) and is married to Rogers Brandon, president of the American General Media radio group.

... * BAKERSFIELDISMS: You know you're from Bakersfield when .... "You no longer associate bridges or rivers with water" and "You swear that just last week there was an orchard where there is now a whole new housing development."
Posted by Richard Beene at 10:41 AM

My mom used to buy our clothes at LouEllas on "special" occasions when we were young. Such fond memories!