* ... HOUSING WOES: There's more evidence that we've got a long way to go before our real estate market recovers. Experts are now predicting that 3.5 million homes nationally will go into foreclosure this year (up from 2.8 million last year) as risky adjustable-rate mortgages set in 2005 reset and unemployment lingers. That's the word from RealtyTrac senior vice president Rick Sharga, who warned foreclosures will continue to rise until they plateau in late 2011. "The second wave of toxic loans is about to hit," Sharga said this week. High unemployment and rate resets will drive the foreclosures, as well as a move toward "strategic defaults" where folks decide it just doesn't make any sense anymore to keep paying on an underwater mortgage. Lastly, and this is scary, Sharga said the next wave of foreclosures will hit more middle and upper class people with prime mortgages. So if you thought the worst of the meltdown was over, think again.

* ... EYESORES: And speaking of foreclosures, there's not a neighborhood in town that is immune from the tell-tale signs of imminent foreclosure: once proud lawns overtaken by knee-high weeds, no cars and no signs of behind the darkened windows. Next time you are driving around town, count the number you see. It's a sobering exercise.

* ... HELLO LANCE: We were all disappointed when Tour de France winner Lance Armstrong crashed and didn't appear in Bakersfield at the end of Stage 5 of the Amgen Tour of California bicycle race. But it turns out he did make an appearance here, although under unforeseen circumstances. After crashing outside of Visalia, Armstrong was rushed to Bakersfield Memorial Hospital and was treated for his crash wounds. Hospital CEO Jon Van Boening said he was alerted to "get to the hospital now!" when word arrived that Armstrong was on his way. "He had his own orthopedic surgeon and his own entourage," Van Boening told me. "I told him we were happy to see him in Bakersfield, but it was too bad it was at the hospital and not the race!" 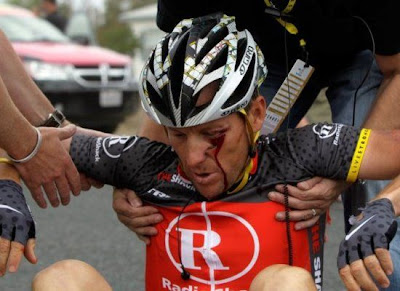 * ... DEZEMBER SALUTE: Nice to see retired banker Ray Dezember honored  with a legacy award by the downtown Rotary Club. Ray and wife Joan, both Whittier College graduates, are known as perhaps the most philanthropic couple in town, giving hundreds of thousands of dollars to worthwhile causes over the years, most of it without fanfare or recognition. Rotary president Duane Keathley delivered the tribute for Ray, who was accompanied by Joan, son Brent and wife Anna and daughter Katie Werdel. 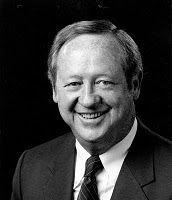 * ... CYCLISTS: Yet more feedback on the debate on cyclists on the road to Woody. This from reader Mike Wenzel: "All slow traffic is required to move to the right side of the road and allow faster traffic around. The bicyclists on Woody road arrogantly refuse to do this. The excuse seems to be 'we pay taxes too.'  After having to follow these arrogant egocentric bicyclists a few times in the mountains, I took a great deal of joy in listening to their self righteous whining about pedestrians on the bike path. failing to move over for them. This 'I own a bike-I am the center of the universe' attitude is comical. Maybe if bicyclists extended a little courtesy to other they may receive a little themselves. By the way, I own a bicycle myself."

* ... MAYOR OF DOWNTOWN: It was nice to see Don Martin, owner of Metro Galleries on 19th Street, recognized with a Beautiful Bakersfield award for promoting the arts. Known by his friends as the "mayor of downtown," Martin has done more for the local arts scene than any other single individual, and he deserves the recognition. A born marketer, Martin was the creative genius behind the "First Friday" arts festivals downtown. 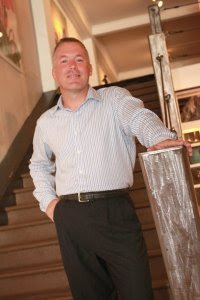 * ... EAST BAKERSFIELDISM: You know you're an East Bakersfield old-timer if  "your mother dropped you off every Saturday morning for the all-day movies at the Granada Theater."
Posted by Richard Beene at 10:11 AM

I'm a cyclist as well, but I agree with Mike Wenzel. Too many cyclists have an attitude, and it hurts the rest of us who ride by the rules. Rick, your pickup guy didn't just have to deal with your group, he encounters every group of cyclists on that road. And he's probably pissed off. Perhaps someone should initiate peace talks, and who better to do that than the local media outlet.