* ... PUBLIC PENSIONS: The retirement of Bakersfield Fire Chief Ron Fraze triggered a harsh reaction from a handful of readers, reflecting a growing anger at what many see as the sweet deal enjoyed by public employees. Reader Stacey Brown's reaction was typical. "The fact that Chief Fraze can even entertain the idea of retirement after 25 years is a slap in the face to all of us that do not have a generous, taxpayer-funded retirement (including health care benefits). I'd be giddy too if I could have retired after 25 years of work. Instead I have the pleasure of working until I no longer physically am able to, in order to pay for my own retirement and health care. Perhaps you see Chief Fraze's retirement as a notable event; let's remove the rose colored glasses and remember that the majority of your readers aren't as giddy as Chief Fraze as they continue to slog through yet another week, another year, another 10 years of work ... and if they are lucky, might actually get to experience a day of 'just relaxing'. Oh wait-we can relax when we're dead." 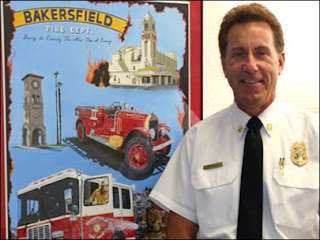 * ... PUBLIC TV: Fresno-based KVPT (Valley Public Television) seems intent on gaining a foothold in Bakersfield and the South Valley. First, it appointed former First Five commissioner Esther Brandon to its board of directors, and now it has engaged the Arts Council of Kern to do some research into how the station is perceived locally. And that is precisely the problem. Most viewers cannot distinguish between Los Angeles-based KCET public television and KVPT. Both have strong signals here and both stations are carried on local cable outlets. And at least to date, neither has done much south Valley programming but KVPT seems intent on building a stronger relationship here. Only time will tell if KVPT's effort is focused on raising more money here or actually focusing more content on south Valley issues.

* ... IVY BOUND: Always happy to share news of our high achieving kids, and here's one story that should impress everyone. Gordon Morris Redmond, a product of West High School and Bakersfield College, is headed to the Ivy League and Columbia University. He actually earned his AA at Orange Coast College, and he did it while working at Trader Joe's and finding time to donate bone marrow for a 40-year-old mother with young children. He is the youngest of 11 children to parents Stan and Janice Redmond. His sister, Camille Grider, wrote to say her family is loyal to St. Francis Parish. "Now today," she wrote, "Bakersfield has a 27-year-old intelligent, selfless, determined product attending a wonderful Ivy League school in New York City this fall."  That's what I would call an inspiring story.

* ... FIRST FRIDAY: It's time for another First Friday celebration downtown. What better way to spend a warm evening in the Dog Days of summer than taking in the art galleries and a meal at one of our downtown eateries? Make sure the old standbys like the Metro Galleries, the Padre Hotel, Mama Roomba's and Uricchio's Trattoria are on your 'to do' list. Metro Galleries on 19th Street will feature some new works of art by Gita Lloyd and Nicole St. John as well as a continuation of Barbara Reid's "Seasons of Her Life" exhibit. (Barbara Reid art shown below) 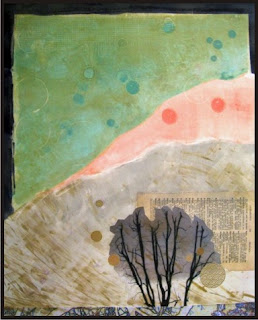 * ... MORE EAST BAKO: Reader Donald Kurtz, owner of Donald Kurtz Investigations, continues with a few memories of growing up in East Bakersfield. "Used to get my hair cut by 'Gus' the barber. Hasham's automotive a hot rod shop. Baker and East 19th Street, a great place to hang out during the Winter Nationals. You also had a couple of five and dime stores with lunch counters and a candy counter! Got one of my first jobs working at Mayfair Market on Kentucky Street. East Bakersfield was the 'place' especially for kids growing up in the 1950s."

* ... BAKERSFIELDISM: Submitted by reader Riley Parker: You know you're a Bakersfield old timer if  "you celebrated your 21st birthday with a Picon Punch at Woolgrower's."
Posted by Richard Beene at 10:42 AM

Re: Public TV. You are correct that building relationships in Kern County is a priority for Valley Public Television. Strong relationships are important to us in every community we serve from Kern to Merced counties. While each community has issues unique to that individual community, the focus of our efforts at KVPT is in large part on issues affecting all Valley residents. Kern County has been well-represented in our programming in recent months. Just last Friday, Jeannette Richardson-Parks, executive director of the Arts Council of Kern appeared on “Great Valley” in an episode highlighting the arts. Guests from Kern County have also appeared on “Great Valley” episodes on health care, gang violence, air quality and the economy – all issues that are of concern to every Valley resident. We filmed an episode of “Art is” with students at Bakersfield’s Downtown Elementary, featured a Bakersfield child and her award-winning recipe on “Hey Kids, Let’s Cook!” and were pleased to present the broadcast premiere of “Never Ending Train,” a documentary on the Bakersfield-based band “Big House.” We also worked with Huell Howser to air “Salute to Kern County” in a two-hour primetime special. Additionally, we’ve produced and aired a number of short feature pieces on Kern County attractions such as CALM, Allensworth State Historic Park, Bakersfield Museum of Art and Kern County Museum. In October, the Kern County School District will participate in KVPT’s filming of the “California Supreme Court Live” in session. As always, KVPT, your local PBS station, encourages the comments and involvement of south Valley residents in helping us shape and evolve our role in Kern County.