Ron Fraze says he's retiring as fire chief and Bakersfield gears up for Sarah Palin and the Oct. 9 Business Conference

* ... FRAZE OUT: Ran into Bakersfield Fire Chief Ron Fraze Friday night and he was giddy with the news that he is retiring after 25 years on the job, almost half as chief. Fraze announced his retirement on his Facebook account. He and wife Shelly have put their Westchester house up for sale but Fraze said they plan on sticking around town. (photo courtesy of Fraze's Facebook page) 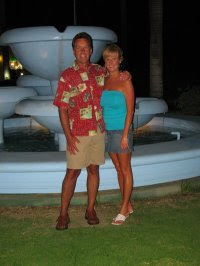 * ... DMV: Cathie Morris responded to my previous post about my hassle-free trip to the DMV via its online appointment system. It wasn't her experience. "You must have had the DMV good fairies with you on the day of your visit. I too, recently had an appointment for a drivers license at the F Street location and was not so blessed.  When I arrived I was given a numbered ticket by the clerk. When I looked at the prompter to find my number I was amazed to see that there were 20 numbers ahead of me. I went back to the clerk and reminded him of my appointment and he was kind enough to give me a new numbered ticket which only placed me behind five other people. I returned to work an hour after my appointment time. The following week I called the DMV toll free number to inquire if I needed an appointment for a VIN verification and was told that I did not as all DMV locations had a drive-up station to take care of this.  Unfortunately that person was not familiar with the F Street site and when I realized that I would have to 'take a number' I went to the Auto Club who handled this for me in 10 minutes. I love the Auto Club."

* ... BUSINESS CONFERENCE: Bumped into local attorney George Martin at the Petroleum Club the other day and he caught me up with plans for the Oct. 9 Bakersfield Business Conference. Martin said 9,000 of the 10,000 tickets have been sold and the event is coming together nicely. This year's lineup includes former vice presidential candidate Sarah Palin, former vice president Dick Cheney, Karl Rove, Mitt Romney and former First Lady Laura Bush. Tickets are going for $145. Interested? Call 661-371-2204.

* ... TURKISH VISITORS: Heard from Gary and Constance Corbell the other day that their son's in-laws were visiting him from Turkey. Craig Corbell, and his wife Nilay married in Turkey last year. Craig's mother-in-law, Gulay Engin, teaches English at Ankara University in the foreign languages department. Turns out she is collecting issues of The Californian to use in her classes. Her husband is Tacettin.Craig works for Welenco and Nilay is a petroleum engineer at Chevron.

* ... EAST BAKO: Reader Donald Kurtz added his own recollections of east Bakersfield. "It was a great place to grow up. You seldom had to go 'downtown.' We had the Stamp and Coin hobby shop on Baker Street, owned and operated by Fred Schaffer and family. Real nice people. Next door, Snider's bike shop and if memory serves me, some sporting goods. Always fun to go down into the basement." More from Donald's recollections later this week.

* ... BAKERSFIELDISM: Local Realtor Patsy Sadler submitted this: You know you're from Bakersfied if "you remember your mom taking you to Fedway Department Store to buy all your clothes."
Posted by Richard Beene at 11:50 AM

The Automobile Club's DMV service is well worth the price of membership.

Fedway's?! I loved the sparkles in the sidewalk and getting new gloves.