I heard from the Pandol family that family patriarch Jack V. Pandol has died after a long battle with Alzheimer's disease. He was 87. The family said Jack died at home Wednesday surrounded by many family members. He is survived by his wife of 62 yeares, Winifred Pandol, his sons Stephen, Jack J. and Jim Pandol, his daughter Maria Zebrowski and five grandchildren.
After marrying Winifred in 1948, Jack settled in rural Delano and began to work selling grapes for the farm as well as selling wine from the local grower's cooperative. He went on to become an innovator in agriculture and became involved politically, being appointed to a number of state boards and commissions by Governors Reagan, Deukmejian and Wilson. In October of 2009, he was bestowed Chile's highest honor, the Bernardo O'Higgins Presidential Order of Merit. Funeral details are pending. (picture of Jack and son Jack is courtesy of Pandol Brothers website) 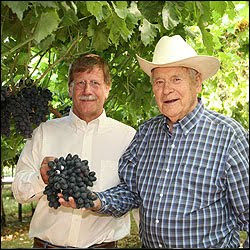