Bako Bits: More bad form at Wal-Mart, the exodus from cable and a day hike in the Los Padres National Forest

* ... LOS PADRES: I had a chance to spend an afternoon hiking in the Los Padres National Forest recently and left wondering why I don't spend every weekend there. Spectacular scenery at 8,800 feet and all within an easy hour of Bakersfield. This is one of those national treasures right at our doorstep that folks in Bakersfield need to appreciate. If you haven't been, I'd recommend it for anyone fit enough to enjoy a good hike. Just take I-5 south, exit at Frazier Park and it's about a 30 minute drive to the parking area. 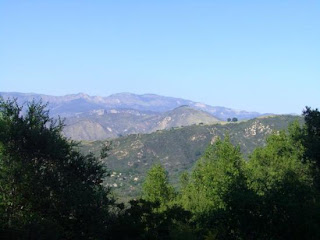 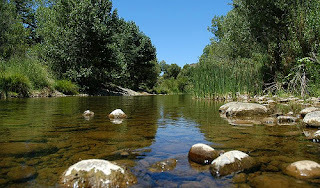 * ... FIRST FRIDAY: If you're taking in the First Friday activities downtown, make sure you stop by Don Martin's Metro Galleries on 19th Street for the opening of a provocative new show titled "Monsters and Gods." The show features the paintings of Mike Tracy, a former Disney animator whose work has hints of both darkness and whimsy. Some of his stuff reminds me of the dark paintings of Francisco Goya after the Spanish painter had gone deaf and was living in haunted fear of going insane. It's well worth a trip to catch this show. 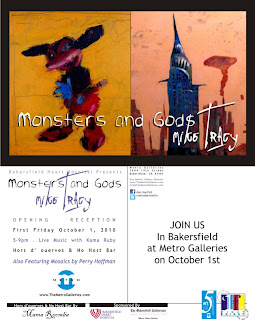 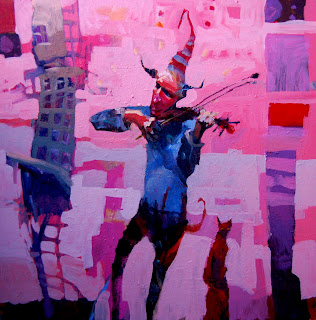 * ... KANSAS: Read an interesting piece in The Washington Post about the 1970s rock group Kansas making a comeback with college kids. Turns out the band, known for songs like "Dust in the Wind," is on tour with university symphonies. One of the school symphonies touring with the band is from Oklahoma State, where the daughter of local Dr. John Heidrick goes to school. The picture that ran with the story showed Erin Heidrick, a freshman, with her violin rehearsing in Stillwater, Oklahoma. (read the entire story here) Not bad considering Erin wasn't yet born when her dad was rocking to "Dust in the Wind." 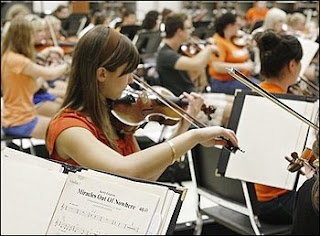 * ... DIAPERS: More than one reader has told me to "cool it" with my obsession of finding used diapers on our streets and in our parks, but this is one I could not resist. Reader Bryan Kelly was in a local Wal-Mart shopping for an inexpensive pair of Dr. Scholl's walking shoes when this happened: "After locating the size and style, I opened the box to make sure the shoes matched. There were no shoes in the box, only a SOILED Pamper. I assume it was soiled from the odor. I did not peek inside to verify my suspicions. That is the day I learned the shop online."

* ... LEAVING CABLE: I have two friends who have canceled their cable service, fed up with the tiered pricing that sends bills nearing $200 a month, including internet service. So how do they survive? Both have plugged into the internet, connecting their TVs through new digital services and "boxes" that tap into websites that offer content or movies, like Hulu and Netflix. One friend has a 62-inch flat screen and no cable. Is this the future?

* ... OVERHEARD: A man and his wife are at the Wal-Mart on Gosford Road Sunday when the power went out. Emergency power kicked it, but apparently the lights were out just long enough for some folks to take advantage of it. "As we waited in line we began to talk with the cashier (who) mentioned that within the first few minutes of the power being out some people attempted to loot items from the store." Good grief.

* ... GARCES: Don't forget the annual Fall barbeque at Garces Memorial High School, always a popular venue to see old friends and enjoy a good meal. The school expects more than 1,500 people to attend, making it one of the "can't miss" social occasions of the year. Tickets are $25 and may be purchased at Garces or at the door. Proceeds benefit the schools athletic programs.

* ... BAKERSFIELDISM:  From Riley Parker: You know you're a Bakersfield old-time if "you remember seeing Sputnik in the sky north of town."
Posted by Richard Beene at 10:47 AM

Dirty diapers and looters at Wal-Mart? Like this isn't something you expected? I saw diapers dumped at the White Lane Wal-Mart 20-something years ago. It's not as if Wal-Mart hasn't had trouble with the lousy condition of its stores or parking lots in the past. They couldn't even bother to fetch their walked-off carts from the neighborhood behind the White Lane store over the years. They were everywhere...almost as common, it seems, as dumped diapers.