Green Frog Market looks to expand and remembering the 1952 earthquake

* ... GREEN FROG: Ran into Scott Hair, owner of the Green Frog Market, over at his "little Frog" market at the corner of Alta Vista and Bernard Street. I'm a big fan of the smaller, more intimate "little Frog" and running into Scott gave me a chance to run down some rumors that he was thinking about opening a location downtown. He said he has always been interested in the downtown/Westchester area and in fact had a piece of property picked out, but decided later against it when the numbers just didn't add up. But Scott said he's not giving up on downtown and is actively looking for ways to expand Green Frog's footprint with smaller "neighborhood" stores that focus on fresh meats and vegetables and more healthy foods. He'd also like to open a Green Frog to serve the growing Northwest and Southwest corridor and has people actively looking for locations. Green Frog was first established in 1934. The "little Frog" on Alta Vista is 18,500 square feet and the larger market on Columbus is a full 34,000 square feet. (Californian photo by Felix Adamo) 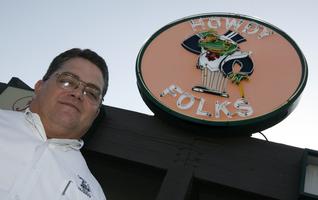 * ... LUIGI'S: Speaking of iconic Bakersfield institutions, stopped by Luigi's on 19th Street Saturday for a birthday lunch in honor of Thomas Johnson, a Liberty High School physics teacher. (It's always nice to hear people like Tom tell me how much they love their work) Saturday lunches at Luigi's are a Bakersfield institution and you're bound to run into at least a half dozen people you know. When the college kids come home for Thanksgiving and Christmas, Luigi's will be the preferred venue to reconnect with old friends. (painting below by Larry Jason) 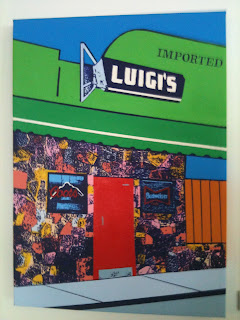 * ... UNION POWER: Reader Thomas Harmon took me to task for wondering aloud how Meg Whitman might have spent that $140 million on charitable causes instead of her failed gubernatorial campaign. Harmon asked why I didn't ask the same question of the powerful unions who also spent millions to defeat Whitman. "What a joke," he wrote. "These unions cry about their pensions and give away millions to put people like Jerry Brown and Barbara Boxer back in office." Harmon is absolutely correct, of course. The unions never think twice about flexing their political muscle to defeat those who dare to oppose the feather-bedding of their pensions and salaries when there are other ways to spend that money.

* ... 1952 EARTHQUAKE: Reader Gene Bonas wrote to share his memories of the 1952 earthquake which changed the look and feel of Bakersfield forever. "Al Gutierrez reminded me I'm an old timer because I vividly recall the collapse of the roof of the Kern County Equipment Company building.  I remember this well because I was standing on the southwest corner of Baker and 18th Streets selling The Bakersfield Californian to passing cars and people waiting to board the city bus. I was leaning against the stop sign when the shaking started. I thought, at first, the shaking was caused by a train passing by on the tracks just 30 feet south of where I was selling. The shaking intensified to a point that I literally hugged the stop sign to keep from falling down. As I looked toward where Woolgrowers now stands, I saw a large cloud of dust and later found out about the collapse of KCEC's roof and the unfortunate death of a KCEC salesman." (photos courtesy of the Kern County Museum) 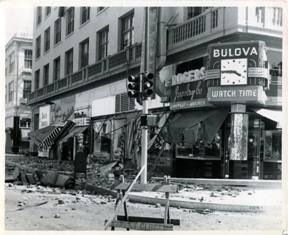 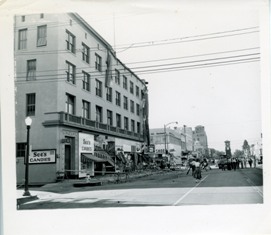 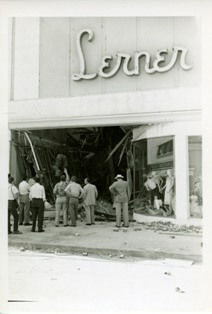 * ... HONORING A VET: For a little inspiration you might want to head over to Frontier High School tomorrow evening (Tuesday) for a special (and free) presentation to honor all veterans, and specifically the Tuskegee airmen. The school band, the Marching Titans, will perform at 7 p.m. At 6 p.m. there will be an All-American hot dog dinner with chips and a drink for a $3 donation.

* ... BAKERSFIELDISM: From reader Patsy Sadler: You know you're a Bakersfield old timer if
you "saw Sonny and Cher perform at the Civic Auditorium before they were really known, around 1965."

Email ThisBlogThis!Share to TwitterShare to FacebookShare to Pinterest
Labels: 1952 earthquake

Regarding unions' practice of contributing millions of dollars to political candidates and pet legislation, this is precisely why I claim "Religious Objector" status, thus depriving the teachers union of my dues money. I feel wise stewardship of my over $900.00 annually is better achieved by California Living Museum, one of the charitable organizations I have to choose from to which my dues money must go to as an alternative.