"Litter: It's beneath us" may be the city's new anti-litter campaign

* ... LITTER CAMPAIGN: It looks like the city may have settled on a new slogan for an aggressive anti-litter campaign for our community. The expected new slogan came from Californian Opinion editor Robert Price, a master wordsmith who came up with a clever double entendre that should play well: "Litter: It's beneath us." Price said he dreamed up the phrase after a blog item I posted referring to a woman who complained when her daughter's class was asked to pick up trash after recess at a local elementary school. The mother apparently told the principal that doing so was "beneath" her child. Dianne Hoover, city parks and recreation director, hopes to engage the media and other civic organizations to send a strong message that folks need to take pride in their community. It's an uphill battle, but it has my support. 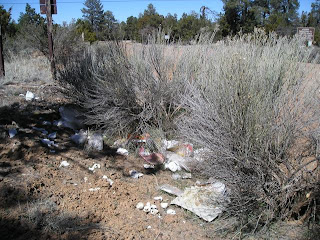 * ... LOCAL BOY: It was nice to learn recently about a local product who has gone on to an amazing career in science and the military. Brandon Arritt, a 1991 Highland High School graduate and United States Air Force Academy appointee, is now working at an Air Force Research Laboratory facility in New Mexico. One of his latest projects: working on a NASA-deployed solar "sail" that uses the velocity of photons to propel or slow objects in space. His mother, Leellen Arritt, works in the county Roads Department. Never one to brag about her son, it fell to another county employee (Allan Krauter) to tell me about Brandon's success.

* ... RACQUET CLUB: The Bakersfield Racquet Club, the historic tennis and fitness club at the corner of Truxtun Avenue and Pine Street, has finally landed a new restaurant tenant. Moo Creamery has announced it will open a second location at the club and will start serving lunches there on March 1. Luigi's Delicatessen had planned to run the restaurant but later backed out.

* ... TAFT ROTARY: Sheri Horn Buck lives in Bakersfield but spends a lot of time in Taft, where she is heading up the relatively new Taft College Foundation. And though she's a member of North Rotary, she's spending a lot of time bonding with the good folks at the Taft Rotary Club. Last week was the club's Valentines Day Dinner where Charlie Beard, president of General Production Services, was honored as Citizen of the Year for his work on the Oil Workers monument. The ladies award was given to Tina Leikam, owner of Taft Dominoes Pizza. And for Sheri? She was made a Paul Harris Fellow (Paul Harris is the founder of Rotary), a recognition that Taft has truly become her second home. 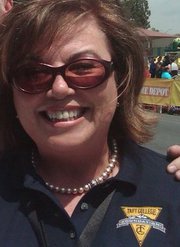 * ... HAWTHORNE SCHOOL: The 1952 earthquake changed the face of Bakersfield forever, destroying so many historic buildings that were replaced by the rather bland architectural styles of the 1950s. One of buildings that is lost forever is the old Hawthorne School that once stood at the corner of 24th and O streets. Reader Tom Mullins said his family ran a small grocery store across the street from the school and "I watched a newly repaired wall section collapse into 24th Street when the August quake hit. Repair workers had just left for the day minutes before and were lucky they weren't on the scaffolding at the time."

* ... BAKERSFIELDISM: From reader Loretta Pedroza: You know you're from Bakersfield "if you remember the horn honking on the Helm's Bakery truck when it came into your neighborhood and you ran out to buy bread or whatever goodies you talk your mom into."
Posted by Richard Beene at 2:50 PM

Great idea! I love the anti-litter campaign slogan; "Litter: It's beneath us." Let's post it everywhere and adopt the concept. I think I'll add it to my email signature.