* ... BROWNSTONE: Another memory came in of the stately McGill  brownstone located at 19th and B streets. Reader Marilyn Sullivan said her grandmother, Erma Payne, once lived next door to the brownstone in a 1911-circa home on 19th Street. "As a small child, I remember the apartments as a looming presence next to my grandmother's beautiful camellia garden, made possible by the presence of the shade from the apartments," she said. "The camellia garden was like so much of my grandmother's big house (with two scary basements); it was delightful and scary at the same time. Speaking of the 1952 earthquake, very little of grandmother's house was damaged (a few bricks fell from the chimney) compared to the damage at the apartments." Erma Payne was the wife of James Bruce Payne, who worked with his father at the original Payne and Son Funeral Home. They built what is now the red brick home of the Junior League. The Payne house next to the McGill still stands, on the south side of 19th Street. (photo is of the Junior League building, original Payne and Son Funeral Home) 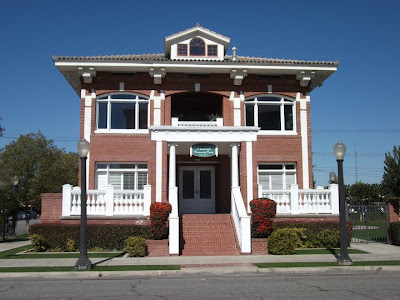 * ... FONTANA'S: Here's an interesting bit of local history, told to me by Joyce (Actis) Weingarden. "You recently ran a column about Fontana Pies and Dorothy Fontana. Dorothy and I are cousins. We haven't seen each other since 1994 and your column made her decide to find family ... We are now in contact. Dorothy and I are cousins because her mother, Eda Fontana (pie matriarch) and my dad, O.J. 'Rusty" Actis (O.J. Actis Junior High) were brother and sister. They came over from Italy as immigrants in 1914 and contributed so much to Bakersfield. My dad was on the Panama School Board (no Buena Vista at that time) for 31 years, the longest of any board member." Turns out Joyce was born here, moved away for 40 years and five years ago came back to the farm started by her grandfather, John Sandrini, in 1904." Welcome back, Joyce.


* ... PAUL WHITE: More than a half dozen readers wrote to say how moved they were with the Friday memorial service for Paul White, the retired educator and fitness buff who died of a heart attack last week. St. Francis Church was packed and at least a hundred folks had to wait outside. Reader Glenn Worrell said he spoke with Paul's family and was told Paul ran both the New York and Boston marathons, and once participated in a 150 mile run. While working at Sunset School early in his career, Paul apparently ran from Bakersfield to the school where he showered and dressed for a day of teaching and coaching. That's commitment.

* ... MARATHON: Hats off to Don and Sharon Brakebill who completed the marathon run in Greece last summer. Thousands of runners competed in the run, which started in Marathon and ended in Athens. The Brakebills were the owners of Carriage Jewelers and remain active runners to this day. They have now retired to the City in the Hills and can be spotted almost daily running the hills of the Northeast.

* ... BOOK DRIVE: The Bakersfield SPCA is gearing up for its annual used book sale, one of its big fund raisers of the year. Spokesman Chuck Nordstrom says the drive will be run from the last week of April through May. So if you have some books you'd like to donate to this most worthy cause, haul them over to the SPCA offices on Gibson Street off Rosedale Highway.

* ... BAKERSFIELDISM: You know you're from Bakersfield if "you get mad every time you see 'Best of Times' and Taft wins at the end."
Posted by Richard Beene at 11:42 AM