* ... HOMETOWN PRIDE: Bakersfield has always had a bit of an inferiority complex (thank you Johnny Carson) so it's always nice to hear how an outsider really views us. Which is why I was thrilled that Cheryl Scott passed along a letter from Dane Rauschenberg, an extreme athlete who visited us recently to run in the Inaugural Fit for Business run put on by the Kern Economic Development Corp. I will let his letter speak for itself: "Did it have the history of the Boston Marathon? Obviously not. What it did have in spades were wonderful volunteers, organizers and runners sprinting down one of Bakersfield's newest running attractions, the Kern River Parkway Bike trail... I have had the opportunity to see every corner of this country in every race distance imaginable. I will never forget how wonderful this race was executed from top to bottom. Take a second to pat yourself on the back, Bakersfield."


* ... HOME VALUES: The real estate website Zillow.com estimates that Bakersfield home values sank 1.6 percent in February and were down 13.9 percent from a year ago. Realtors will tell you that Zillow only computes averages and doesn't take into account upgrades and other intangibles, but it does generally reflect trends. As for my own home, purchased a year ago? Zilllow says it has lost 17 percent of its value. Ouch. Meanwhile, perhaps a more accurate view of the local market comes from appraiser Gary Crabtree, who said the median price for a home in Kern County was $115,500, up from $111,000 in March but still a drop of 11.3 percent from April of last year. Crabtree added: "My Bakersfield ONLY numbers are the median price home was $126,000 in April, down from $128,000 in March and down 7.2% from the same period last year. "

* ... CSUB TENNIS: I stopped by a fund raiser for Cal State women's tennis last weekend and left even more impressed with the level of support for the program. Held at Stockdale Country Club on the grass courts, the Noodles and Nets event was just the latest in a long list of fund raisers to save both the women's tennis and wrestling programs. CSUB Athletic Director Jeff Konya was there, along with predecessor Rudy Carvajal, and many other supporters including Bruce and Molly Busacca, Vernon and Janis Varner, Kryssy Jamieson, Jenny Vaughn, Michael and Chris Olague, P.K. Zander, Garrett Ming, Bryan Lynn and many others. 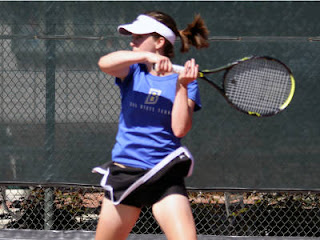 * ... MOVER: Kudos to Chris Lowe, who has been hired as a vice president/small business banker at Bank of America downtown. Lowe comes from Westamerica Bank, where he spent the last six and a half years. Lowe is a product of Taft College and recently joined the board of directors of the North of the River Chamber of Commerce.

* ... COLLEGE BOUND: Congrats to Jennifer Lynn Parish, a Highland High grad who is headed off to San Diego State University. She is graduating with a 4.33 GPA and is the daughter of Leo and Lori Cox.

* ... SPOTTED: Young mother in older green Toyota Camry, texting away on her cell phone after  picking up her son at Juliet Thorner School, nearly runs down four other boys in the street as she glides through a stop sign ignoring the school crossing guard.

* ... BAKERSFIELDISM: You know you're from Bakersfield if you ate the six-egg omelette at the old Friendly Cafe in Oildale.
Posted by Richard Beene at 2:08 PM

On the bright side, the house you sold before buying your current house is also worth 17 percent less, too. So you made more money having sold it when you did than if you'd tried to sell it now. Bright side, Mr. Gloomy-Gus!