* ... COLBY: Today's bad taste award goes to Richie Whitt, a Dallas Observer columnist who recently criticized Bakersfield native Colby Lewis for taking paternity leave after his second child was born. That's right, a Texas sportswriter trying to dictate ethics to the a right-handed ace for the Texas Rangers. Said Whitt: "Colby Lewis is scheduled to start after missing his last regular turn in the rotation because -- I'm not making this up -- his wife, Jenny, was giving birth in California. To the couple's second child. Don't have kids of my own but I raised a step-son for eight years. I know all about sacrifice and love and how great children are. But a pitcher missing one of maybe 30 starts? And it's all kosher because of Major League Baseball's new paternity leave rule?"  Huh? With comments like that, I think it's wise that Whitt didn't have children of his won. 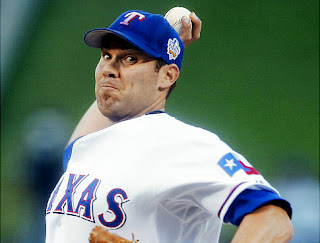 * ... WEEKEND: Splendid weekend around our town. The river was flowing  bank to bank and virtually every greenbelt - Beach Park, Hart Park, Mill Creek, Riverwalk - was teeming with people. I stopped by the Saturday downtown farmer's market and picked up enough organic greens to make a salad topped with strips of steak from the Green Frog butcher shop on Bernard Street.


* ... HIGH ACHIEVER: Two years ago Christopher Anderson graduated from Bakersfield College, which in itself is not remarkable, unless you knew he was just 14 years old at the time. And now comes word that Christopher will be graduating from UC Santa Barbara with a bachelor's degree in history. Now that's a high achiever.

* ... OCCIDENTAL: I also heard that Sally Palmer, daughter of Melissa Palmer, is carrying on a long family tradition by deciding to enroll at Occidental College this fall. Not only did her mother graduate from Occidental, but Sally's great grand father (Oran Palmer) also went there. He was Kern County's first county counsel. Oran's sister, Ethelmae, was in the Oxy class of 1925. Melissa graduated from Highland High School in 1984 and Oxy in 1988, missing President Obama by a few years. "We recently attended a reception for admitted students, and although 23 years have passed since I wandered around on campus, it still felt like home," Melissa said. "lo triumphe!" Sally is a senior at Stockdale High School.

* ... BAD BEHAVIOR: Received an invitation to the Garces Memorial High School's graduation ceremony for the son of a good friend. And there, written on the invitation, were the words "no jeans, shorts or tank tops." How sad that our schools have to remind folks to leave their sandals and wife beater tank tops at home.

* ... BAKERSFIELDISM: Reader Bob Petker says you know you're from Bakersfield if you know that the old Kern County Land Company's Calloway Ranch was located on the site of a shopping center at Calloway and Hageman roads.
Posted by Richard Beene at 11:48 AM