* ... THE BUZZ: The talk downtown is that former city Fire Chief Ron Fraze may run for the Ward 2 City Council seat being vacated by Sue Benham. Benham, now vice president of development at Memorial Hospital, has said she won't run for another term in the ward, which covers much of the downtown area. Fraze lives downtown and supporters feel his inside knowledge of how the city works would serve the area well.  I talked to Fraze Saturday and he told me he is considering a run and is honored that some folks are urging him to enter the race. Stay tuned. 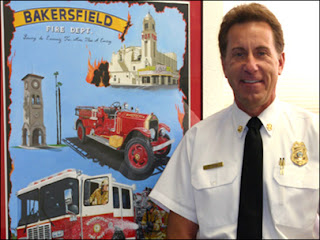 * ... WRESTLING: Had coffee the other day with Craig Tobin, a local businessman who is among a growing group of people trying save the wrestling program out at CSUB. Wrestling is one of those sports that is basically fending for itself in an era of extreme budget cuts and Tobin and others have been committed to finding ways to keep it alive. There have been fund raisers and some guerrilla marketing, and last week they put more than 1,000 people in the stands at the Icardo Center to watch CSUB take on Arizona State. Craig will be my guest today (Monday) on Californian Radio KERN 1180 beginning at 9 a.m. Stay tuned because you will hear from from these folks.


* ... KINDNESS: Christine Lollar dropped me a note to send her good wishes to Wendy Wayne, who is dealing with a recurrence of cancer and was recently honored with a random act of kindness. "Thank you, Richard, for listing the 'kindness' and mentioning Wendy’s 'battling' non-Hodgkin’s. What a perfect adjective. I found it ironic that the organization is called 'Soldier’s Smile' because that is exactly what Wendy Wayne wears on her face every day, a 'soldier’s smile.' She’s long been my mentor. If I could have her grace and humbleness in my pinky finger I will have lived a successful life. When you think of her life from the Peace Corps to First Five, immunization volunteer, and ever the civic servant whenever called upon. Wendy is an amazing, all around, individual, and she has truly fought her own fight (her physical battles) and the fight of thousands, maybe millions, who could not fight for themselves."

* ... OVERHEARD: This little gem comes from reader Walter Stewart. "I am amazed and amused in a Bakersfield restaurant yesterday. The man sitting in the booth in front of me was wearing a cap. I was amazed when a man walking by paused and said, 'Cultured people remove their hats in restaurants.' I was amused when the man dryly responded, 'Cultured people mind their own business.' I am still chuckling."


* ... SPOTTED: Jessica Massey submits this bit of bad form, spotted in the parking lot of Albertson's on Gosford and White Lane. "The woman in the truck in front of me completely stopped the flow of traffic in the parking lot by coming to a full stop to open her driver's side door and toss a soda cup on the ground! I honked at her and gave her the 'are you serious?' signal and she just gave me a dirty look and drove off. So rude to the poor Albertson's employee that probably had to pick it up and to me for getting that dirty look!"

* ... BAKERSFIELDISM: You know you're from Bakersfield when keeping up with the Jones means serving Smith's cookies. Thanks to J.R. Lewis of Keller Williams for that little ditty.

Posted by Richard Beene at 3:56 PM

"You know you're from Bakersfield when keeping up with the Jones means serving Smith's cookies..."