* ... BAILY IS BACK: Remember the 3-month-old Labradoodle named Baily who  was stolen from his cage in a downtown burglary last week? Well he's back, unharmed and the same except for extensive grooming and painted blue nails. The owner reported that he went home for lunch and "found my neighbor on my doorstep holding our dog. It took me a minute to recognize him because of the extensive grooming and the blue sparking painted nails, but it was him. She had come home midday to find him in her back yard with her dog. We don't know if he found his way home or he was dumped over the fence, but he's here." Who knows what happened, but it's good the pup is back home.


* ... SINGLES: Did you know that almost half of all American adults today are not married, and that 28 percent of them live alone - the highest level in U.S. history? That's the word from Fortune magazine that noted the percentage of Americans living by themselves has doubled since 1960. Fortune noted that "Singletons play an essential yet unappreciated role in revitalizing cities and animating public spaces. Compared with married people, they're more likely to eat out in cafes and restaurants, exercise in a gym, take art classes, attend public events and volunteer." Further, the magazine said high concentrations of singles help create "urban tribes, social networks that substitute for traditional families."

* ... GREENLAWN: Greenlawn Mortuaries and Cemeteries is constructing a new "Celebration of Life" center at its Southwest location, and is looking to the public to help design it with a special spin. The company is asking local families to submit "old black and white photos, 1950s and before, for consideration. If selected they will be copied, framed and displayed throughout the building." The originals will be returned. Interested? Call Sandy Moffett at (661) 324-9701.


* ... EAST HIGH: Bill Abshier wrote to honor the legacy of former Bakersfield College basketball coach Ralph Krafve, and also noted that Krafve spent 13 years at East High where he racked up a record of 262-56.  "I was a sophomore at East in 1967 when we won the first Valley title ever for East High and the team was considered the finest team the Bakersfield area ever produced. (Quoting my 1967 yearbook). I have a great memory of sitting at a game that season with my dad, and my dad saying as we watched Krafve sit there with his legs crossed, relaxed,  'Look at him sit there, he isn't worried one bit, he has already done his home work.'" 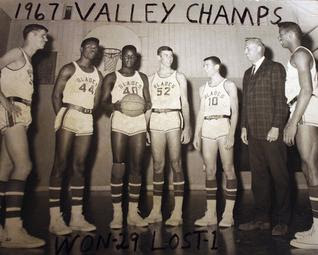 * ... SPOTTED: From Tonia Cody comes this: "I pulled into the ARCO AM/PM this morning on Union Avenue and pulling up to the pump beside me was a middle aged man in a large four-wheel drive pick up ... (then he) tosses a fully lit cigarette out his window.  God knows what might have happened to both he and I had there be flamable liquid on the ground."