How about some home brewed whiskey right here in Bakersfield? And David Blaine looks to auction a football with signatures from local NFL greats

* ... NFL GREATS: Did you know that Kern County has produced more than 40 men who have played in the National Football League? And David Blaine, an attorney over at Klein DeNatale Goldner, is hoping to get all of those who are alive to sign  a commemorative NFL football to auction off for a good cause. The football has already been signed by folks like Ryan Matthews (Chargers),

David Carr (Giants), Ken Ruettgers (Packers), Michael Stewart (Rams), Aaron Merz (Bills), Joey Porter (Steelers), Brent McClanahan (Vikings), Mark Nichols (Lions), Jeff Buckey (Dolphins), Stephen Neal (Patriots) and others. "It's been a four month journey sending this football around the country," Blaine told me. "It's been shipped, hauled and handed off from person to person." The football will be auctioned at the CASA Kentucky Derby Party on Saturday, May 5, with all proceeds going to CASA. Tickets are $175 each. Call (661) 631-2272 if interested. 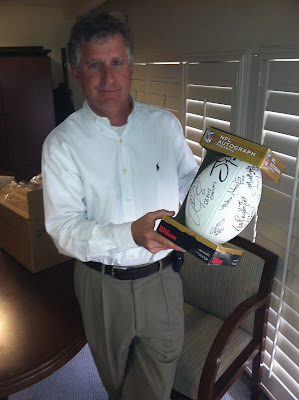 * ... SPOTTED: Peter Mayer dropped me a note about a horrific incident he witnessed involving a dog riding in the back of a pickup truck. Mayer was driving on Highway 99 when he came upon large yellow labrador pacing back and forth in the bed of the truck, at times placing its front paws on the side of the bed. "Within seconds the dog actually jumped from the right side of the truck (traveling in the right lane), hitting the pavement at about 60 miles per hour. It rolled under the truck and was hit by the owner himself at least twice as the truck swerved and spun to a stop facing the opposite direction. The dog actually got up and limped to the right shoulder, and the truck also pulled off (still facing the wrong way). Thankfully, nobody was directly behind and surrounding traffic was able to slow and move away from the situation.  I don’t know what ultimately happened to the poor dog or the owner." Mayer noted that pets are like children, and they "depend on us to take care of them and keep them from dangerous situations. I don’t have a problem with a dog riding in a pickup truck, but keep it on a very short leash, attached to the middle of the truck bed." Amen.

* .... BOMB SHELTERS: Last week I mentioned how some folks in town built bomb shelters following the 1962 Cuban Missile Crisis. But did you know there was a huge one beneath East High? That's what Ben Ansolabehere told me. "Living in Bakersfield put us right in the middle of some of this country's most important targets. Nestled between Edwards Air force Base, Vandenberg Air Force Base,  SAC (Strategic Air Command) base near Sacramento, not to mention the largest city in the U.S., with one miscalculation and we were gone. However, one of the largest shelters built was actually under the cafeteria at East High School. While teaching at East, both World and U.S History, I had the privilege of taking my early classes down to the shelter to see some of the old bunk beds, provisions, and sparse living conditions which would have had to be endured by any of the survivors lucky enough to make it down there."

* ... SEMPER FI: From reader Kathy Hahn: "While working out this morning at Eric Nolan's Extreme Kickboxing, I was talking with a young man who had spent 12 years with the Navy and Marine Corps. Now he is working on getting a PA degree at Taft college while supporting a wife and three small children. So proud to have our tax dollars going to someone with determination and character. His hopes are to go to Stanford to get a Doctors degree and then reenlist. Wow!"

* ... BAKO WHISKEY: Bakersfield is known for a lot of things, and it soon may be known for its whiskey. That's right, local businessman Dave Plivelich told me about his North High School buddy Wade Bowen and a group of investors who plan to produce and market a high grade whiskey right here in Bakersfield. Dave, who owns the The Marcom Group digital marketing agency, told me he recently reconnected with Bowen who shared his dream of making premium whiskey. They now have all the federal licenses as well as federal approval of the recipe. The still is built and empty bottles and corks are ready to go. "We're anticipating bringing Bakersfield its first legitimate whiskey, and it's a damn fine whiskey to boot, sometime in May of this year. This is all produced here in Bakersfield and will be made in small batches. Our thing is... if you are going to get a superb American-made whiskey that doesn't come from Tennessee (Bowen's is better anyways), its only logical that it would come from someplace with such a rich west coast history." Bowen's Spirits Inc. will be the producer of Bowen's Whiskey. Look for it.

Posted by Richard Beene at 3:13 PM

In addition to finding the time to write in regarding his concern (or was it a complaint?) about the injured dog on Hwy 99, that guy should have stopped and offered his assistance! If he is so passionate about the dependence of animals and chilren on responsible adults, then why didn't he stop and drive that dog to the emergeny Veterinarian? Accidents are aptly named: an undesirable or unfortunate happening that occurs unintentionally and usually results in harm, injury, damage, or loss; casualty; mishap (from dictionary.com). That kid driving the truck did not intend for his dog to come to harm Sunday. He needed the help of concerned citizens, not their scorn. I find it is entirely too easy to spew your pious sentiment safely from the driver's seat as you speed by a bleeding dog in the roadway. Concerned citizens should resolve to be a part of the solution, rather than just another complainer.

Hey, go easy on us Tennesseans...

The person driving the truck needed to be ticketed for the violation of California Law. The state needs to take this seriously, and concerned citizens need to act up by calling 911 when they see people driving with unrestrained dogs in the back of trucks (an all-too-common occurrence).

Garces grad Greg Robinson won two Super Bowls as the Defensive Coordinator of the Broncos. He'd be a good sig to add.