* ... EARTHQUAKES: The stories on the anniversary of the devastating 1952 Bakersfield earthquakes triggered this response from a reader: "People say that as an infant you may remember traumatic experiences. In August 1952 I was 18 months old. We lived just west of Kern Medical Center on Flower Street. When the earthquake hit I was in my crib in the living room. My mother and sister were piano players and we had a low top piano in the living room also. I, to this day, can vividly remember the piano bouncing two to three feet off the floor and moving past my crib which was moving the other way across the room. My sister, 9 years old, and her girlfriend were on the front porch and were thrown out into the front yard. I am sure there are others with lasting memories but this is one I can truly say was a memory that I have not forgot." (photo courtesy of The Bakersfield Californian)

* ... SHOOTING: The horrific shooting at the Colorado theater that killed so many innocent moviegoers has renewed the debate over gun control. Would outlawing assault rifles prevent a recurrence of these tragedies? What about limiting the amount of ammunition that can be bought at one time on the internet? We will talk gun control on Californian Radio KERN 1180 on Monday at 9 a.m. We will also be talking to a vice president of Campbell's Soup company which recently paid $1.5 billion for locally owned Bolthouse Farms. Join us for the discussion.

* ... HITCHING POSTS: Harold Tyner wrote to say he and wife Elaine have one of the old, classic hitching posts erected in his front yard. "I have owned and ridden horses for several years," he wrote. "Hal Wygant's daughter Laurie is married to our son Steven Holcomb. Hal had acquired one of the original hitching posts  that was once in front of the court house.  He offered it to us, and it is now in our front yard, waiting for any would be rider and horse to tie up! " (file photo of hitching posts) 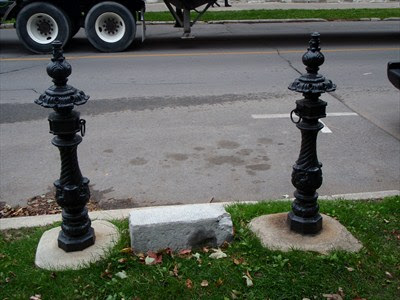 * ... SPOTTED:  Longtime reader Terry Andrews shared this bit of bad form when he was eating breakfast at the Knotty Pine Cafe. "It was a delicious breakfast (but) there was a man facing us, with three ladies at his table, and he flossed over his plate for 10 minutes after the meal. Ugh!:"

* ... OVERHEARD: A young woman is telling her friend about running into group of city firemen at a downtown woman's boutique. "So we are there talking and in walk a dozen of these young firemen who are inspecting the building and asking questions about the crawl space. They were so nice and polite and these guys were hot! Every woman in the place just stood there in a trance! It was quite a show!"

* ... PAINTER: My post last week on Rich Johnson's crew who painted by downtown home brought this note from reader Karen Kandarian. "Richard Johnson has been doing my painting for at least 25 years.  Richard has a vast knowledge of all the current colors and products on the market.  He is always right on in helping make decisions.  He is fair, honest, trustworthy and reliable.  He always finishes the job and does it well. He is a true professional.  As you stated, he gets all his work by word of mouth. What better recommendation can a person receive than to have so many satisfied customers giving you a referral?  He’s the best in my book."

Posted by Richard Beene at 9:21 AM

Often forgotten in reflections on the 1952 earthquake is the amazing job the local schools did. A dozen or more Bakersfield schools were either totally destroyed, partially destroyed or damaged and needed substantial repairs. The first quake was about six weeks before school was to start. The school district, under the leadership of a remarkable superintendent, John Compton, worked out a plan to put most students on double session (morning or afternoon only) and to transport students from their old schools to their new, temporary ones. Teachers and classrooms had to be reassigned. Records, books and supplies had to be moved from school to school. More buses had to be purchased and delivered to Bakersfield. This was complicated by the August quake which added more damaged buildings. Yet it all got done. School opened about three weeks late. Classrooms were sometimes in curious places. Mine was on the auditorium stage of what was left of McKinley School. The town heroes, I've always felt, were the people who made the school system work against big odds.
-- Jim Houck, Visalia