McCarthy: Obamacare is a disaster, a crazy Jenga like puzzle that will punish employers and give workers fewer and more expensive choices

Rep. Kevin McCarthy, the House Majority Whip and a Bakersfield Republican, gives us his weekly update from Capitol Hill.


"Earlier this month, the President decided to unilaterally suspend the employer mandate of the Affordable Care Act for one year over concerns that his Administration, three full years after enactment, simply is not ready to implement its own massive overhaul.  In fact, it seems the President is finally seeing for himself what we’ve been telling him all along:  this bill is a disaster." 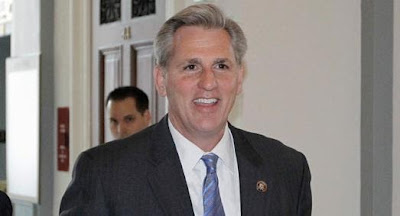 "As many of our small business owners know, the employer mandate will impose penalties on employers if they do not comply with new regulations included in Obamacare.  This mandate is just one block of the complicated Jenga puzzle that is Obamacare.   When you start pulling out the pieces, the entire puzzle becomes unstable, and that is exactly what is happening to the law.

"This mandate has the Internal Revenue Service (IRS), which has 47 separate powers under Obamacare, requiring businesses to report employee benefit information to them in order to verify and enforce the mandate’s standards.  And we know the IRS is not prepared nor should they have this role.  Given the ongoing investigation of the heavy-handedness of its tax-exempt unit, who believes that the IRS right now can be entrusted with new authority?  I do not.

"In addition, while the employer mandate may be suspended for one year, the individual mandate requiring individuals to purchase health insurance presumably still goes into effect on October 1st of this year. But if the employer mandate is bad for businesses, it is just as bad for individuals. Throughout our community, we are beginning to see premiums and costs rise. As the law prepares to implemented, however, my biggest concern lies in California itself.

"As one of the 16 states choosing to set up its own exchange, California is attempting to set up an extensive bureaucracy to attempt to enroll California residents.  The State Insurance Commissioner and anti –fraud groups have expressed concerns that the exchange is falling short in ensuring that these people are being adequately screened to perform a job that involves the handling of personal and confidential information.  And even worse, because HHS won’t enforce the standards of the employer mandate until 2015, they’ve decided that they will not require the state exchanges to certify an individual’s qualifications either.  Instead, the state-run exchanges can simply use an “honor system” of personal attestation, verifying individuals’ social security numbers, household income, and insurance status solely on their word.   It is an open invitation to fraud and improper payments. That type of policy is unthinkable and irresponsible.  I believe state-run exchanges should be held to higher standards for the sake of protecting personal confidential information, and to ensure that scarce taxpayer dollars aren’t subject to waste or fraud when handing out subsidies without proper verification.

"The decision to delay the employer mandate by the Administration did not happen overnight. It required substantial review by departments throughout the Executive Branch. My House colleagues and I have written to the President demanding to know the type of analysis conducted to come to this decision and the legality of the decision to unilaterally delay this portion of the law, but not the rest of the law.  Americans deserve to know this information of the true impact of Obamacare.  It’s insulting to American families and job creators that President Obama believes a one year delay can solve the long-term problems that Obamacare causes for our nation’s job creators.

"There are common sense solutions that address the real cost drivers of health care costs, such as tort reform and expanding health insurance options across state lines that will benefit consumers.  Unfortunately, Obamacare does not do this, and instead includes bad and unworkable policy.  I know it, and now we’re seeing it.  That is why I have supported repealing the law entirely, and voted to repeal Obamacare in its entirety on May 16 this year.  Unfortunately, the Senate has refused to act on that bill.  Now that the Administration is unilaterally deciding what parts of Obamacare it wishes to enforce, the House took action this week.   As a former constitutional law professor, the President should understand that the Congress, not the White House, has the sole authority in amending written law.  Therefore, in response to his decision to administratively delay the implementation of certain provisions in his own law, the House passed legislation (H.R. 2667) that statutorily amends Obamacare to delay the employer mandate until 2015.  Additionally, the House passed H.R. 2668, which parallels the delay of the employer mandate by ensuring individuals and families are treated the same way as employers by delaying the individual mandate until 2015 as well.   Both bills passed by bipartisan majority votes.  It is difficult to believe that this Administration wouldn’t want to give hardworking American families the same needed reprieve from the law’s crushing mandate as they gave corporate America.  Be assured that I will continue to fight the flawed implementation of this health care law that threatens to affect the way we receive our health care.
Posted by Richard Beene at 2:00 PM