* ... TURNER: Kern County Superior Court lost one of its most tenured judges this month with the retirement of Judge Jerold L. Turner. Turner is a true Bakersfield native, born at Mercy Hospital and attending school at Franklin Elementary and Foothill High before heading off to UCLA. He eventually

came back to Bakersfield and went to Bakersfield College and later earned a degree in history from UC San Diego. He started his career at Vizzard, Baker, Sullivan and McFarland and later worked at Young Woolridge. He became the court commissioner in 1990 and was elected a judge in 1992. He will now be "of counsel" with Thomas Anton and Associates. 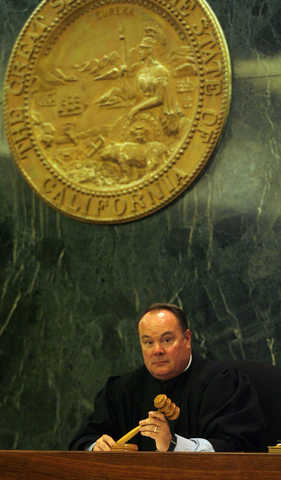 * ... SPOTTED: A group of people are urging their friends on social media to boycott the downtown Maya Cinemas for allowing a group to set up a table in front protesting police brutality in the death of David Silva. Silva, if you remember, was the man who died in the custody of Kern Sheriff's deputies in front of Kern Medical Center. Emails are being distributed saying this is a slap in the face of Kern County law enforcement.

* ... PARKWAY: Carl Nicita wrote to respond to another reader who warned others about speeding on the new Westside Parkway. Said Carl: "Just wanted to send a quick comment regarding a contention by a reader that BPD is trying to 'increase it's coffers with more revenue' from traffic tickets on the new Westside Parkway. I beg to differ. It's not about revenue. It's their duties as traffic officers to protect the public and enforce driving regulations. Unfortunately receiving a citation maybe the only way a driver will get the message to drive safely."

* ... BEALE PARK: Jerry Kirkland wrote that reader Mike Stewart "stirred the memory cells of many of us who spent our formative years hanging out at Beale Park during the 1940s and into the early 1950s. The little store that he refers to - I think it was called Beale Park Grocery - was owned by a funny old guy named Gus Ergo who lived directly across the street from his business, most often referred to as just Gus's. You could call in an order and it would be delivered by Gus himself in his black delivery van. My brother, Al, worked for Gus as the delivery boy for a short time but, although a gifted athlete, he was a terrible driver and probably got fired. During the war there were lots of shortages, one of them being Fleer's Bubble Gum - the penultimate chew. Gus seemed to come up with a case of Fleer's on a fairly regular basis and when that word got out, the race was on for those of us at Roosevelt School, knowing the supply would not last long.  I found myself in that neighborhood a few years back and wandered down E Street. The little store is long gone, of course, but I saw where it had been, the empty lot badly overgrown, the old foundation barely visible among the weeds. Different times."

* ... MEMORIES: Lamar Kerley wrote to ask if anyone else remembers a business called Cactus by Mueller out on Rosedale Highway. "Even as an adolescent I loved plants and was quite taken by their succulents and cactuses. In the early 1970s before all of the bridges were built, going out there was quite a drive, a long trip my mother was not fond of doing."
Posted by Richard Beene at 11:14 AM