McCarthy: Simplify and tax code and allow for the production of reliable energy sources. These are keys to the next great American century

House Majority Whip Kevin McCarthy gives us his weekly view from Capitol Hill. In his words:

"This century is poised to be a new American century. I believe there are two areas that if addressed and reformed, will unleash the enormous economic potential that currently exists in our country - we must reform our tax code and allow for the production of abundant and reliable energy sources.

"Simply put, we must simplify and reduce the complexity of the tax code.  A 72,000 page tax code that requires Americans to spend 6.6 billion hours in compliance is not only unacceptable and unfair – it drags down our economy. We need a tax code that allows hardworking Americans to keep more of what they earn in order to maximize economic activity. 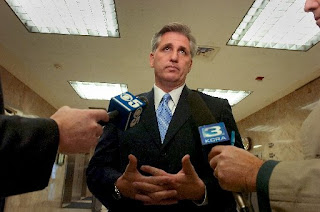 "How many of us know small business owners or families that spend precious time and resources trying to comply with thousands of do’s and don’ts that are in the tax code. Let us start with capping the rate on individuals and businesses to 25 percent. Right now in California, a local business that is competing in the international market will pay a total combined tax rate of 43.84%. That is higher than any of competitor around the world. It is my hope that we will have real proposals to consider in the near future that puts America on a level playing field with the rest of the world.

"Second, America should lead the way in energy production.  Many may not realize this, but since last November, our nation is the number one petroleum producer in the world and the United States produced more than Europe, Central America, and South America combined.  We should establish a goal of becoming energy independent by 2020.  To achieve this, we need to expedite the permitting process to allow for additional production in existing areas of production of oil, natural gas and renewable energy, build the Keystone XL pipeline, and upgrade our electricity infrastructure to support our energy needs.

"In California alone, the benefits of additional energy production would be enormous creating hundreds of thousands of jobs by 2030.  Nationally, a recent report noted the potential of 3.6 million new jobs could be created by 2020 as a result of increased energy production, 600,000 would be from oil and natural gas, 1.1 million would be generated to meet the demand in related industrial and manufacturing sectors. No community understands the need to lead the way in innovation and energy production more than Kern County.

Also, why do you let this guy this go on and on about things that will never happen ("like simplify the tax code")?

You are a freaking muppet for this clown!

Also, so now we are energy independent...I thought the dems or Obama or some other boogeyman would not allow this to happen? Why does he need legislation when it is already happening??