City crews tackle complaints on trash and litter, and a wildlife expert worried about mountain lions being driven close to home because of the drought

* ... TRASH: Nice to see the folks over at the Bakersfield Solid Waste Division responding to complaints about trash and litter. After reading a post on this blog about the litter on the northbound ramp connecting Panorama Drive and Manor Street, Sal Moretti said he would dispatch a

crew from the Bakersfield Homeless Center to clean the area. Moretti, superintendent of the Solid Waste Division, said city residents can call 86-CLEAN when they spot areas that need to be cleaned. Moretti said crews from the homeless center also are helping clean the Westside Parkway and local freeways.

* ... BOBCATS: Steve Merlo is an avid hunter and outdoors writer who knows a lot about wildlife around town. After reading about the bobcat recently spotted on the bike path, he wrote to say bobcats were actually fairly common in our area. "What I would rather read about is the actual sightings of mountain lions in the same areas. The drought is forcing many species, including the big cats, to leave their traditional living areas and move down to wherever they can find adequate food and water--the Kern River being close to perfect habitat. I'm worried that someone will be attacked by a food deprived lion along the path or river and might possibly be seriously hurt or even killed. You see, I feel that whenever someone claims to see a mountain lion, then the only reason they saw it in the first place was because the animal was already stalking their pets or them." 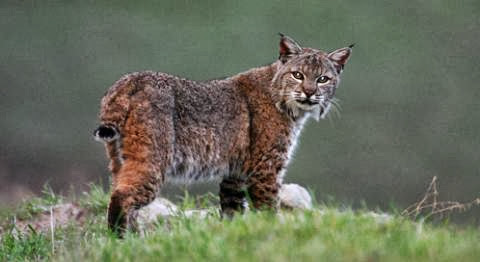 * ... MUELLER: I was saddened to hear of the passing of Larry Mueller, one of our local citizens who always worked to make Bakersfield a better place. He died Sunday after a long battle with cancer. He was 64. Mueller was past president of the Rotary Breakfast Club and a charter member of the Twilight Rotary Club. He was active on the club level but also contributed many times on the Rotary District level.

* ... BAD FORM: Shame on the woman who attended an assembly at Norris Elementary School and chose to disrupt the ceremony when her son was honored with a group of other students. Said one grandparent:  "In the group that included my granddaughter, a women who somehow pushed her way in the middle of the students in the center section towards the front, jumps up with a large poster, complete with lights congratulating a young boy by name. She continued to hold up the large poster  pretty much blocking the view for most of the families and made it nearly impossible to get a picture as she bounced around with her huge obnoxious sign.  Good lesson to that child to only think of themselves."

* ... GRAPERY: The plaudits and national attention for local grape company The Grapery keep on coming. The Grapery received an honorary Award of Excellence in a national, triple blind judging of table grapes conducted by expert Masters of Taste. The judging was part of the ongoing USA Taste Championships founded in 1986 with the establishment of Chefs in America, whose professional board members gather weekly to conduct taste tests on a myriad of food service and retail products. Nice to know they agree with the good taste we locals and fans of the company, founded by Jim Beagle and Jack Pandol, have known all along.

"What I would rather read about is the actual sightings of mountain lions in the same areas."
What kind of idiot remark is that? He wants to read about mountain lions spotted in residential areas stalking people and pets? What?

I was not at this SOM ceremony but have been to Norris Elementary School when students have been honored in the same way (I'm not going to lie, I also saw video of this SOM ceremony...stop exaggerating…. she was in the back). The school has no policy against signs or balloons that I know of....I have seen balloons there in the past. As I recall everyone is given the chance to get up, walk to the front, and take photos. Sounds like you were there looking for someone to honor as well. If you didn't get off your butt for your child, shame on you! And if you believe the 65 year old woman holding the sign was his mother, good for her! We should all be proud of good behavior and children should be honored for doing well in school! All of this,,,"everyone has to be treated the same" nonsense is a lot of what is wrong with society today....guess what? Life isn't fair! And everyone is different! And perhaps the extra attention and this nudge in the right direction will put this child on the right path in life. Just because you didn't think of “a large poster, complete with lights congratulating a young boy by name”, you shouldn't try to take from this child's day or diminish the attention shown by the people who very evidently love and care enough to be there for him.

Go somewhere else and pick on someone else....there are so many other places where people are actually behaving badly!