McCarthy: While people suffer, the White House refuses to negotiate and sits on the sidelines and watches as Rome burns

Rep. Kevin McCarthy, House Majority Whip and a Bakersfield Republican, gives us his weekly view from Capitol Hill. In his words:

"As the government shutdown dominates the headlines and discussion, it is mind boggling to me that the Senate and the Administration refuses to engage in any talks to resolve this situation.  And the one instance when they did call to meet, it was to reiterate they refuse to talk. 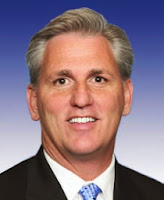 "First, let me be very clear – neither I nor my colleagues wanted a government shutdown. Before the September 30th deadline, the House of Representatives passed three continuing resolutions to fund our government with amendments that had bipartisan support.  We passed legislation out of the House asking for a delay of Obamacare for individuals just like businesses got, a permanent repeal of the Obamacare tax on pacemakers and other medical devices, and treating Members of Congress, the Senate, and the President and his staff like every other American under Obamacare.  And sadly, the Senate refuses to act and the White House continues to sit on the sidelines.  I cannot imagine any President, at a time of a government shutdown, not providing presidential leadership, and instead allowing more burdens to be imposed on the American public.

"The House continues to try to lessen the burdens on the American people.  We have passed this week legislation that will fund our veterans, our national parks, our medical research institutions, and other federal operations.  The Senate can act and they should act now.

"As this Administration tried to roll out Obamacare, we saw what we have been saying for some time  it is not ready for primetime.  The more Americans learn about the law, the more they want it delayed.  The President himself is giving reason for the need to delay the law; he has already unilaterally delayed provisions in Obamacare ten times, including giving businesses an exemption from penalties and taxes that individuals are still faced with.  Just as President Obama was announcing another delay of Obamacare, he was attacking those who wanted to delay this unworkable law.

"The President has said that in divided government, no one gets 100% of what they want.  We simply ask that his words match his actions. I hope that Senator Reid and the Senate Democrats and President Obama start working with us so we can resolve the challenges that face the American people.

Ouch! Perhaps "burns" may be an appropriate term considering the fella that lit himself up today.

Keep work for those that sent you to Washington. Thanks.