McCarthy: Private business, not government, is how the United States became the largest oil and gas producer in the world

"As Californians, we know all too well the slightly sinking feeling in our stomachs when the gas gauge in our car points to ‘E.’  And across the country, utility costs remain top of mind to Americans when 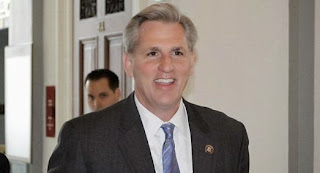 budgeting month to month.  But the energy resources that power our cars, heat our homes, and keep the lights on have undergone resurgence in our country, leading to an opportunity for increased standard of living for all Americans.

"This week was an important week in the U.S. House of Representatives for Americans seeking lower energy costs and an overall more robust economy.  Three bills were passed that will increase the production of American-made energy, ensure states remain the primary overseer of the work in their communities, and will help deliver affordable energy directly to our communities.

"By the end of this year, it is expected that the U.S. will be the top oil and gas producer in the world – surpassing Russia and Saudi Arabia.  Astonishingly, these accomplishments have come from private and state owned lands and not lands owned by the federal government.  To ensure our energy future remains in our hands and not OPEC, we cannot remain static.  On Wednesday, the House moved to end the bureaucratic delays that have so far prohibited us from harnessing all our energy blessings on federally owned lands.

"Once this opportunity is provided however, future actions by the federal government further threaten our energy independence and the affordable energy it brings along with it.  The innovative process known as hydraulic fracturing that has enabled us to access previously inaccessible oil and gas in an environmentally sound manner is currently regulated by the states – and they are doing a safe and responsible job.  The Obama administration wants to change that and add unnecessary interference from Washington.  So rather than impose an average of 228 days of permitting time by the federal government’s involvement, the House voted to keep it where states have it now – at 30 days.

"Turning these newfound energy resources into actual savings for the American household requires reliable and efficient infrastructure networks to transport them.  Unfortunately, our current system cannot keep up with the increased energy production.  To incentivize the free market to invest and upgrade our aging infrastructure, the federal government must be held accountable to reasonable permitting timelines.  The last vote in the House this week did just that.

I"n this energy lifecycle, new American jobs will be created and monthly gasoline and utility costs from Boston to Bakersfield will be reduced.  Lower energy costs are a bipartisan goal and the votes in the House this week represent that - each bill garnering bipartisan support.  I remain committed to an energy policy that embraces American energy and eases the angst of that next stop at the gas station.
Posted by Richard Beene at 9:07 AM