Supporters of Common Core testing take me to task over a science question, and Washington State University names its engineering school after former Aera Energy president and CEO Gene Voiland


* … COMMON CORE: I clearly touched a nerve last week in writing about what I considered an extremely difficult science question on the Common Core testing at Fruitvale Jr. High School. There

were too many responses to list, and most readers were kind enough to politely point out my ignorance. Said Bruce Deeter: "Richard, Richard, Richard, ridiculously hard? That problem isn't difficult at all. Think about it, why does a rock sink in water and a piece of wood float on water? Rock is more dense and wood less dense. Or take oil and water, you've surely seen layers of liquids like these float on top of each other. Or salad dressing in a bottle as another example. This problem is no different. The numerical values just give you the info you need to place them in order by what is more dense and less dense. Density of pure water is 1.0, BTW. This is some very basic stuff. I remember doing this sort of thing in show and tell in fifth grade in the 1960s." Thanks Bruce. I am blaming this on my public education in the state of Georgia.

* …. MORE CORE: Added Andy Wonderly: "All the problem requires are understanding the concept of density, knowing the density of water (which should be an easy recall for anyone actively engaged in a science class), and being able to put numbers in order from largest to smallest. I don't know anything about Common Core, so I can't comment on the question's appropriateness for this exam.  But to call this question 'ridiculously hard' perpetuates an unfortunate attitude toward science that I believe is holding Americans back in the STEM fields. I can't blame the child for his or her reaction. Science is hard. I have been there myself. But this child's reaction should be met with aid and explanation, not applause and exaltation. I pray that someone gave this child five seconds of their time to explain this simple word problem in the hope that the child may gain a better understanding of science and increased reading comprehension."

* … MORE CORE: And finally there was this thoughtful response from Lora Coppola: "I assumed that as a journalist, word problems would be your forte. This particular word problem requires no solving for unknowns, or any other complex reasoning skills. It only requires a basic grasp of the term 'density,' the knowledge that the density of water is 1.0, and the ability arrange numbers from largest to smallest.  Even if the student in question had not paid attention in class, he or she probably knows innately that wood floats on water and lead sinks.  Of course, if the student had not paid attention, he/she might have missed the news that the density of water is 1.0. But since it is the key element to solving this question, I'm going to assume that it was emphasized in class and on lab and homework assignments. To answer the question: From bottom layer (most dense) to top (least dense): Purple, water, red, yellow. The wood chip is floating on the red layer. Methinks you're stirring the pot." Methinks I must have skipped out on that high school science class.

* … VOILAND: Congratulations to former Aera Energy CEO Gene Voiland and his wife Linda, who had a major department at Washington State Universitynamed in their honor. The Linda and Gene Voiland School of Chemical Engineering and Bioengineering was unveiled last week in part of honor Gene's contributions to his alma mater. 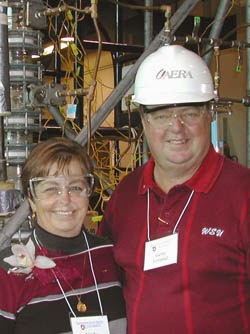 * … GOOD FORM: The stretch of Alfred Harrell Highway near the soccer fields was awash in litter this Sunday, but it was heartening to see a group of cyclists (David Rous, Adam Hensley and Richard Picarelli) hope off their bikes and take the time to pick it all up. Meanwhile, up on Panorama Drive I spotted a young woman and an older man doing the same thing, spending their morning cleaning up the trash that others so unceremoniously left in the park.

* … SPOTTED: On my friend Joe Drew's Facebook page: "Why is it when you retire, and time is no longer very important, they give you a watch?"

* … KINDNESS: Barbara Winegar was among a table for eight recently at Kan Pai restaurant on Brimhall Road, enjoying her daughter's birthday party while sharing a long table with two stranger. "When it came time to pay for our great  meal, my son-in law was informed that the bill had already been taken  care of by the couple at the end of the table. We thanked them again and again, but  we want everyone to know what a gracious couple  they are, and what a magnanimous gesture. The gentleman's name is Hayward  from Norfolk Va., and his lady friend from Bakersfield. We are very touched by your generosity."