House Majority Leader Kevin McCarthy on what July Fourth means to all Americans, a time of gratitude and grace

"The Fourth of July is an American holiday, but it is recognized around the world as a turning point in history where the dominance of the few gave way to the rights of the many. It is the point at which the people rejected distant powers and centralized governments in favor of government elected by the people, for the people, and accountable to the people. 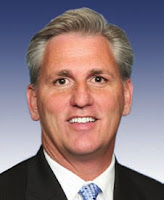 "Centuries after the birth of our nation, we still celebrate our Declaration of Independence because the principles it was founded on—government by the people, the innate dignity of human beings, and liberty and equal justice for all—are universal. They do not change and they can never be forgotten.

"On this day, we celebrate the fact that, in America, we are not united by bloodlines or even shared opinion. Rather, we are united by the bold belief that every person is guaranteed rights that their government must respect. We are united by the rooted knowledge that government by the few for the interest of the few will necessarily devolve into tyranny. And we are united by the hope that our ideals will be ever more perfectly realized as we continue living this great American experiment.

"This time of year, we also remember those who gave the ultimate sacrifice so that we might enjoy these liberties and this hope. We extend our prayers and our gratitude to the courageous men and women currently serving in the armed forces and their families. There is no doubt that we live in the land of the free because of the brave.

"As we enjoy this holiday, watch some fireworks, and spend time with family and friends, we know that celebrating Independence Day is much more than remembering the greatness of our past. It is a call to make a brighter future—to build upon the foundations that make America not just a country, but an idea.
Posted by Richard Beene at 12:04 PM