House Majority Leader Kevin McCarthy: Labor board ruling expands the definition of an employer and puts local businesses at risk

House Majority Leader Kevin McCarthy gives us his weekly view from Capitol Hill. In his words: 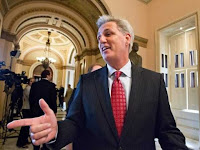 "Small businesses are at the heart of the American economy. The spirit and vision of an aspiring entrepreneur or small businessperson is what this country was built on. Every day, people take great risk in starting something of their own. The endeavor can turn out to be a success or it can fail. At either turn, it is the individual left basking in the glory or picking up the pieces. That is what makes America different; what makes our country great. And through different business models which encourage flexibility and entrepreneurship, we have seen neighbors in our communities willing to dream to become the success stories of today and possibly the growing small and large businesses of tomorrow.  They often hold the name of a global brand but operate within the heart of the community, taking on financial risk and personnel decision-making, creating and offering much-needed jobs. In these respects, it is just as if they were starting their own sandwich shop, something I was fortunate to do in the past. So when I see a franchise, I celebrate the jobs they create. This same model goes for companies that provide a service to a larger one. The success of time-tested brands offers opportunity for others to achieve that dream.

"This decision by the NLRB makes that dream more uncertain. However, what the decision makes crystal clear is that when the Obama Administration's NLRB sees a relationship between businesses, they see a need for more regulation and centralization. In so doing, the NLRB fundamentally ignores the ramifications its decision may have on an important business model that have helped generations of Americans share in the American Dream. The result of this irresponsible decision means less opportunity for local communities. It is unfathomable that as small businesses face rising costs via more Washington rules, and American workers face stagnant wages due to government imposed costs, the Obama Administration wants to stymie the American Dream for entrepreneurs and workers.

"Also, next week the House will consider a resolution of disapproval of the Iran nuclear deal. This vote will have an immense impact on our national security as well as the security of our friends and partners around the world. For weeks Congress has learned of the numerous giveaways to the world’s leading state-sponsor of terrorism while supposed verification mechanisms have been exposed as dangerously insufficient. With a clear majority of Congress
Posted by Richard Beene at 2:07 PM