* .... MCCARTHY AND RYAN: Accompanied by our own Rep. Kevin McCarthy, House Speaker Paul Ryan is making a swing through California to raise money for House Republicans. Early

Monday morning, as a light rain fell on Bakersfield, I drove to Milt's Coffee Shop off Olive Drive to have breakfast with Ryan, McCarthy and McCarthy's son, Connor.
There was no breaking news here, no stop the presses moment, just an opportunity for McCarthy and his guests to start the day at a signature Bakersfield landmark while entertaining diners who greeted Kevin on a first-name basis.
Over a breakfast of coffee, omelettes, fruit and Milt's famous hash browns, Ryan and McCarthy talked candidly about the Republican and Democratic debates - a "time of anxiety" as McCarthy put it - and the role of the House leadership in providing  a "foundation of substance" for pushing the country forward no matter who is the next president.
Are they frustrated and concerned about how the debates have reflected the Republican Party? Of course, but as Ryan noted, "we don't have any control over that. We have to concentrate on defining ourselves and be a place of ideas." 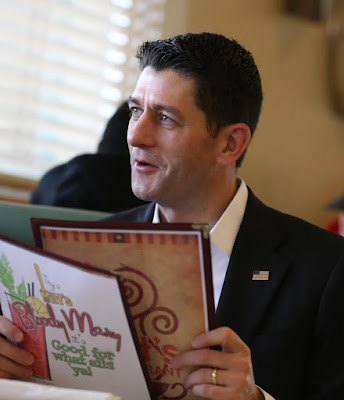 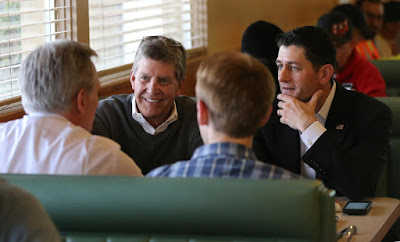 And what about GOP front runner Donald Trump's much publicized comment that Ryan would "pay a big price" if the Speaker would not work with Trump? Ryan downplayed it, saying he laughed aloud when he first heard it and added that he had since talked to Trump on the telephone this weekend.
He said that Trump seemed to "walk back"  the threat a bit but did not elaborate.
Ryan, at 165 pounds as fit as he appears on TV, said the House was moving forward with a "clarifying mandate" based on five principles: economic growth and tax reform, replacing Obamacare with a better alternative while addressing entitlement spending; dealing with poverty and moving people from welfare to work; national security; and finally reclaiming the separation of powers that has been undermined by the extensive use of executive powers.
If it sounds like the 1984 Contract with America under then Speaker Newt Gingrich, it is but both Ryan and McCarthy are reluctant to frame it in that manner, seeking to put their own stamp on a House initiative to bring the country together.
"We need to go on the offensive," Ryan said, setting out core Republican goals that any nominee - even Trump - could work with. Ryan said he reviewed the five-point strategy with Trump during the telephone call and Trump seemed okay with it.
And what about the Political Action Committee that was created to draft Ryan as a presidential nominee in the event of a brokered convention? "My lawyers have disavowed it," he said. "We sent them a letter and asked them to cease and desist."
Ryan condemned Trump earlier this week for refusing to disavow the Ku Klux Klan, but the Republican leader has sought to remain neutral in the race. He said he had met Trump several years ago but only chatted with him for a minute or so.

* ... CONNOR: Politics aside, the highlight of my breakfast was chatting with and getting to know Connor McCarthy, who will graduate this year with a degree in philosophy from Georgetown University. Connor is engaging, wickedly smart and carries the confident swagger of youth. His first job after graduation: he will be working for the $4 billion venture capital firm of Andreessen Horowitz in Menlo Park near Silicon Valley's famous Sand Hill Road. Not a bad start for a Bakersfield boy who always hits up Milt's when he is back in town.

* ... RYAN: The Speaker, who was Mitt Romney's running mate in the last election, counts as his mentors the late Congressman Jack Kemp, a moderate who co-sponsored the Kemp-Roth tax cut in 1981. Ryan called Kemp not only a mentor but a huge influence on his own political philosophy.

* ... FITNESS: At 46, Ryan is a fitness nut who often worked out with McCarthy in the House gym. His father died of a heart attack at 55 and it drives Ryan to put a high priority on his health. In Bakersfield, he stayed at the downtown Marriott ("Marriotts have good gyms" he told me) and showed up for breakfast after an intense 40 minute workout doing multiple reps of the p90x workout. McCarthy gave up p90x and now has a personal trainer.

* ... HOUSE OF CARDS: Does Ryan watch the Kevin Spacey HBO series House of Cards, a political thriller based in Washington and full of deceit, sex and mayhem? "Not a chance," he told me, saying Washington can appear bad enough to outsiders without a TV drama making it worse.    McCarthy, on the other hand, was shadowed by Spacey when the series was getting under way and remains a fan of the show.