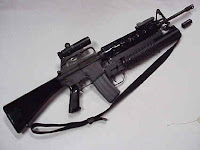 Chatted with my old friend Gene Thome over at Bear Mountain Sports today and he is one businessman who is not complaining about the economy. After stuttering to find the right words, Gene was literally gushing about how busy he has been, selling handguns, AR-15 assault rifles, ammunition, gun safes, shotguns, just about anything you can think of. The reason: fear that President Obama and Attorney General Eric Holder will not only reinstate the ban on assault rifles, but include other weapons as well. "He (Holder)said as much a few days ago," Gene told me. "I can't keep stuff in the store. I'm up at night on the internet trying to find handguns to order." Gene is a longtime businessman and hunting and shooting advocate who obeys the laws and believes in protecting the Second Amendment. For some gun-loving humor, check out the video TV ad on his website (click here to view). Business is so good Gene is hold a "customer appreciation sale" this weekend at his store, located south of Highway 58 on Weedpatch Highway.
Posted by Richard Beene at 12:05 PM

Yeah, it started days after the election, according to a story we did in The Californian last Nov. 8.

Here's an excerpt:
Ken Quarnberg, owner of Valley Gun, has been in the gun sales business since 1977.

He said this is the middle of hunting season, so they normally are pretty busy. But he's seen a distinct increase in people buying nonhunting guns since the election.

The same thing happened the last time a Democrat was elected president.

"I saw quite a bit of this during the Clinton administration. It tends to scare people, who have a constitutional right to purchase and own firearms."

At Second Amendment Sports in Bakersfield, an employee who declined to give his name said sales had been brisk.

But Adam Carvalho, owner of Aloha Gun Traders in Bakersfield, said his traffic has been normal.

Goodness! Don't you guys work in the same building? Can't you have conversations in the hallways or something? Is this what the world comes to, where the conversations are only via a computer and a server? What a cold, cold world.

But then I'd have to brush my teeth...

My! That's painting a vivid picture!