Tomorrow's news this second: my relationship with Lance 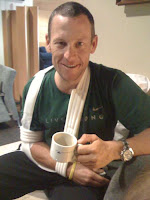 In what seems like a nanosecond Twitter has gone from a funky nerd tool to a powerful application for businesses and marketers. If you don't yet understand or use Twitter, you need to get with it, because it is changing the rules. At its core, Twitter is a social networking and micro-blogging service that enables its users to send and read other users' updates, commonly known as tweets. These tweets are text-based posts of up to 140 bytes in length that are displayed on the user's profile page and delivered to other users who have signed up to receive them. Consider my experience, for example. I "follow" Lance Armstrong's tweets, which allowed me to keep up with Lance during both the Tour of Australia and Tour of California. He talked about his race day, who won and he would often post pictures. I learned of his crash and injury when he sent a tweet himself, within an hour after the crash, and he followed it up with this picture. So by the time I saw this on the TV news, and read about it in the newspapers, not only was I fully informed, but I had heard it from the actual "source" himself, Lance. It renders all media - radio, TV, blogs, websites, newspapers - irrelevant. I also now follow certain tweets of financial experts, who direct me to deep pockets of market and financial analysis. This too has rendered my normal sources of this content - financial websites, the Wall Street Journal etc - less important. Technology changes and defines, and Twitter is doing it in a nanosecond.
Posted by Richard Beene at 8:43 AM

I'm going to be a Twitter follower of the Romanian Taskmaster.

But seriously, how many people care that much about Lance Armstrong to subscribe to his twitters and care that they got it before it was on the news? And these "deep pockets" of market and financial analysis you're being led to-- how exactly reputable or trustworthy are they likely to be? And even beyond that, are you saying that your newspaper, that I pay to get delivered daily but the content of which you give away for free the night before to non-paying people on-line, is completely worthless? Can I get my subscription money back, please? Blogs are inane enough and stare into belly buttons of the authors in an extraordinarily egotistical way. Do I need to get dozens of idiotic twitters all day long?

All good points Anon. We should engage on a new media panel some day. So:
* I believe and will continue to believe there will always be a place for a professionally edited product (print or digital). There is certainly a value proposition in having it packaged and sorted with the knowledge that there is some degree of sanity going into it.
* But that does not negate the power of the example I noted. If Lance speaks directly to me, telling me how he feels post surgery and what is prospects for the Tour are and providing me with pictures of his own, why would I prefer some the version of the same story from a stringer deep the Spain who is selling his copy to a wire service? In this case the filter makes no sense.
* As for those "deep pockets," I suppose we all have to make value judgments about the validity and credibility of the sources of the stories. Is an analyst from Sanford Bernstein more credible than the 29-year-old business reporter for the AP? Is Cramer more credible than the next person? We all have to make these calls.
* Lastly I totally get your rant on "idiotic twitters." But I think there's gold in them thar hills... you just gotta find it.
tnx for the feedback

Maybe you'd want the stringer in Spain to tell you things, via reporting and possibly first-hand observation, that Lance doesn't want to tell you or that other people observed. We might hope that the stringer would provide us with a broader view of what the broken collarbone meant. You seem to disparage the Spanish stringer "selling" his copy when it seems as if more and more newspapers are relying on cheap stringers or unpaid "community reporters" (is that what they're being called???) these days to supply news. It appears to me that the volunteer community writers or a person who tweets about himself both have a "dog in the fight" that they are reporting upon. Example being a story about a merger between two churches in the Californian a week ago written by...the pastors' wives. I quit reading the story when I put two-and-two together.

Good point about the analyst vs. the 29-year-old WSJ reporter (are we being ageist?) You do have to make your calls about who to believe. I'm guessing that you really can't believe either these days, given the state of the stock market.

But you don't answer the question. I've loyally subscribed to the Californian for decades and now you're giving content away before it hits my driveway. Do you actually want me to quit subscribing to the hard copy? What's your motive?

Thanks for your response. Much appreciated.

This requires a level of discourse beyond this blog methinks. But first, we of course value our subscribers and it is worth noting that what is viewed online for free is a mere fraction of what is carried in the printed paper that is delivered to your driveway each month for the price of a couple lattes, and I suspect the separation from paid to free will only widen. Second, I have been both a "paid stringer" living in Spain and a wire service reporter, so I can speak both to the strengths and inherit weaknesses of both formats. My original post was only to note that Twitter (and other forms of technology) are changing the game to some extent, and in my position I ignore it at my own peril.

Thanks for your replies.

I enjoyed this exchange. Wow, Richard, you lived in Spain? :)

Some celebrities and politicians are not sending their own tweets, which makes this just another, albeit shrewd, form of marketing. Nice to see that Lance does not use a ghost Twitterer:

Thanks for the link, Barbara. After Obama totally outmaneuvered them in the election the GOP (evidence kevin McCarthy) has gone full throttle into digital marketing, which is smart of them. (And yes, we lived and worked in Spain - Madrid - and I wouldn't trade anything for it.