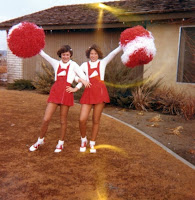 Yet more evidence of the mainstreaming of social networking sites like Facebook. I'm out in extreme west Kern County today, shooting competition skeet and eating barbeque, among people who would never be mistaken for being technologically savvy, when a colleague casually mentions she used Facebook to create a "group" devoted to alumni of Lakeside School over off Old River Road. The site has been up less than two months and dozens have joined, posting pictures and reconnecting. There's the swim team, the 4H Club, class outings etc. More evidence of the mainstreaming of social networking that never ceases to impress me. Check out the Lakeside group here.
Posted by Richard Beene at 9:06 PM