Water in the Kern River: what a difference a thimble full of water does for a community's mood 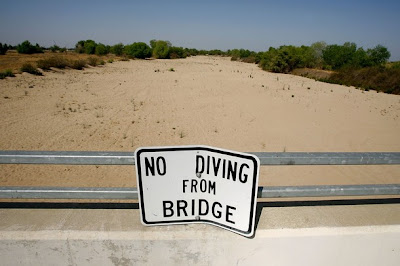 The picture above pretty much tells the story. Only in Bakersfield do you have a river where ... well ... there is no water. And in a community known to the outside world for its 115-degree summers, not to mention dust storms so strong and ugly that you think you're in Egypt's great Western Desert, God knows we can use a little water. Which is why weekends like this one, where for one reason or another a thimble full of water showed up in the river, are so joyous. The Californian reported that we'll have water for two to three weeks because two water districts are doing so as part of a joint water banking program. It's amazing how a little water can improve the mood. Everyone comments on it, folks go down to the riverbank to wade in it, and I even spotted one woman taking pictures of it. Imagine that! Water in a riverbed has become so rare we take pictures of it. I'm not smart enough to know why we don't have water in the river year round. You'll have to ask Lois Henry or someone with a higher pay grade. But it has always astounded me that there isn't more political pressure to make it happen. How many more homes would we sell and what kind of riverside development would we have if we had a water flowing year round, like the picture of the upstream Kern River below? We've all just seemed to have given up. So in the meantime, as the T-shirts say:

"Bakersfield: a riverbed runs through it." 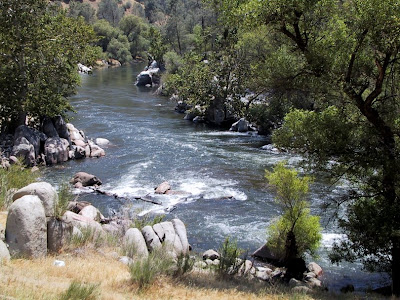 Posted by Richard Beene at 4:32 PM

"Now, it's not deep nor wide,
But it's a mean piece of water, my friend.
And I may cross on the highway,
But I'll never swim Kern River again."
--"Kern River," Merle Haggard

You're right.
You do need to learn more about the river. In a perfect world, the river would flow year round with Mountain Dew and unicorns would dance on rainbows. With the limited resources available, the river is being managed as efficiently as possible.

PS - The photo of the river running through the Kern Canyon is a bit misleading regarding water flowing in the low lands.

Maybelline: We may disagree on the river but unicorns dancing on rainbows is a terrific visual ... plus I love your gardening blog. Amazing art and love the cats ...

It all comes down to money. If the citizens want water in the river, they'll have to pay for it. It's not free.