Spent part of the morning scanning a new report that came my way entitled "Energizing California: Mapping Chevron's Impacts on the Golden State." Conducted for Chevron by the Milken Institute, it's a complete rundown of Chevron's extensive California operations, most of which are headquartered in Bakersfield. That Bakersfield is an oil town comes as no surprise to anyone who calls it home, but the size and scope of big oil's footprint here is impressive beyond words.
In 2007, the report says, the oil companies employed 65,000 people in California and indirectly (via contractors I suppose) supported the employment of another 240,000 people. Chevron alone employed some 10,000 workers. 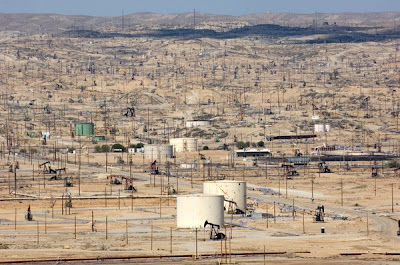 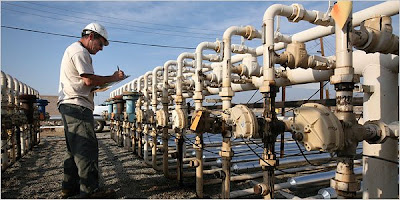 In Bakersfield, the report said Chevron:
* ... employed 1,140 workers in the Bakersfield area.
* ... overall, Chevron accounts for about a fourth of the region's economic activity industry wide.
* ... In 2006 Kern County was responsible for 76 percent of California's total oil production.
* ... the Kern River oil field (pictured above and operated by Chevron) is the third largest oil field in the state, producing more than 30.8 million barrels or roughly 14 percent of the state's oil production.
* ... in addition Chevron also operates more than 35 percent of the Midway-Sunset field, which currently is the largest oil-producing field in the state.
* ... given our less diversified industry mix, the report argues that Chevron's operations in Bakersfield "may have more critical implications in this local economy than in the rest of the state. In a region of relatively low per capita income, the presence of Chevron generates higher-paying jobs with earnings that are, in turn, recycled back into the local economy...."
Posted by Richard Beene at 12:09 PM

But wehre does the $$ spent on contractors end up?
Neighbors, based out o TX.
Veiola Water...international.
U.S.Computers, based out of LA, (Louisiana)
KSI, Bako and WY. sub's their labor through Continental staffing.

Chevron sheds responsibility for accidents by hiring contractors. ex: A spill... no matter what happens, it isn't Chevron that had the spill, it is a 'contractor not following procedure' and that fault could go back to someone not wearing steel-toe boots. What someone would have been paid as a oil field worker 20 years ago now has 4 or 5 fingers in the mix, General contractor, sub contractor, managing contractor and the hiring contractor.. So when Chevron say's they pay $200 per hour for oil filed workers.. slice that in half each time it go's down the ladder.. So the $200 an hour worker Chevron expects is nothing more than a $10.00 an hour temp, with no benefits and no job security.

The $$ arn't put into the economy, it's just the recycled rhetoric of corporate speak that is recycled.

Every time that head pulls the rod up the hole it prints new money.

Lets try Bakersfield without Chevron and see how that works. My guess is Chevron's prescence in Baco over time will alway be a net positive.